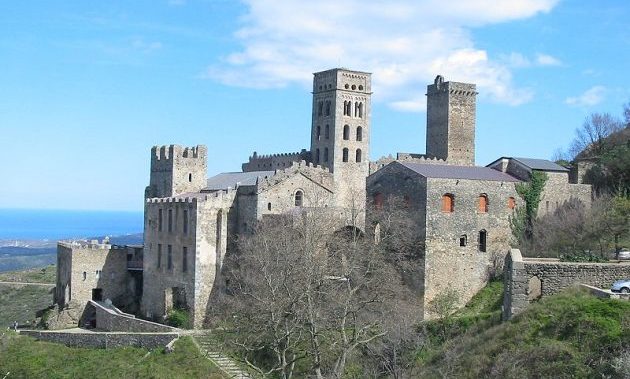 In the story of Cadaqués, the monastery Sant Pere de Rodes has always played a major role. The vast Benedictine stronghold with unscalable walls looms over the surrounding countryside just ten kilometres around the coast from the village.

The Benedictines first came to this remote corner of Iberia at the end of the 9th century when the Barbarian hordes were besieging Rome. Pope John VIII ordered a legion of monks to cross the Mediterranean in secret with the remains of St Peter – Sant Pere in Catalan – and wait for further instructions.

They stepped ashore in one of the narrow inlets around Cap de Creus, where they remained until the Barbarians were driven back from the Holy City. If the monks had expected to be sailing home again to Rome, they would have been disappointed. Pope John instructed his brothers to remain in this bleak, uninhabited place and found a religious community.

Sant Pere de Rodes is first mentioned in a document dated 878, but it was more than seventy years, in 945, before the monastery was established on the slopes of the Verdera Mountain below the fortifications that crest the summit.

Architects of the era believed in astrology as well as astronomy. Just as the three Wise Men were guided by a star to Bethlehem, mediaeval masons studied celestial auguries and the motions of the universe before laying the foundations of their buildings.

The position chosen for Sant Pere was not only aligned with the stars but provided unimpeded views north across the coastline to French maritime waters and southwards to the Gulf of Roses. The abbot and his monks knew as they looked out beneath shaded brows at the sun rising in the east that, when an attack came, it would come from the sea.

With its grey walls that shine like silver in the midday sun and ringing bells that echoed along the coastline, Sant Pere provided a sense of progress and belonging among the scattered communities migrating to the region. A ten-minute walk downhill from the monastery, the encampment of builders and artisans attracted weavers, potters and herdsmen. What began as a cluster of tents and shacks developed into a thriving settlement that became known as Sant Creu de Rodes. The village has long since vanished, although the chapel of Santa Helena remains largely intact, a church without a parish.

The Baluard of Cap de Quers

Thirty years after the main work was completed at Sant Pere de Rodes, the monks must have thought their abbot had been driven mad by the fierce winds that rattled the bell in its tower and scraped the paint from the walls. French monarchs for two hundred years – beginning with Charlemagne – had colonised much of Catalonia and the abbot was keen to extend his own sphere of influence by building an outpost above the grey vacant bay around the coast marked on ancient maps as Cap de Quers – Rocky Cape.

Cap de Quers nestled at the end of a narrow peninsula cut off by dense forests and what became known as  Montgrí and the Pení, the last foothills of the Pyrenees that fold into each other like crossed arms before plunging into the sea. A thousand years ago, the cape was too remote to sustain a community.

Viewing headland from the bay, to the north beyond the beach, the land rises in steps that grow steeper as it climbs Montgrí. On the south side, between Port Dogué and the position where the restaurant Es Baluard stands today, the rocks surge from the sea, forming a natural fortification with tall rounded walls. After years building the monastery, the masons who had made their homes in Santa Creu de Rodes were employed to cut blocks from the mountainside to complete a defensive circle that rose to a high platform with a view of the horizon.

Josep Pla in his book Cadaqués describes the abbot’s defensive structure as a castillo, a castle. But there were no Roman columns or tableaux of biblical scenes, just roughly hewn walls in what would be better defined as a stronghold, or a bastion – in Catalan, baluard, the word borrowed sagely to name the present-day eatery with its fresh fish and the view of pleasure yachts rather than brigands in the bay. The abbot wanted to attract settlers who would see the outpost as a place of safety and an early warning of an impending attack.

When the baluard was first built, it would have appeared from the distance on misty days to be floating on the waves, a storybook castle from the pages of the contemporaneously written Arabian Nights. The volcanic rock called pizarra, from which the entire peninsula is formed, is a hard slate that changes colour as the light of day constantly changes: silvery-blue, pearl grey, lead-grey, sometimes ethereal, at others melancholic. The pizarra was used to construct dwellings, surface paths, line wells and water channels.

The Benedictines raised a temple at the stronghold’s highest point where the ‘new’ Church of Santa María stands today. With its white buttressed walls that take on a rosy glow in the setting sun, the 16th century Gothic style edifice was built on the same site and in the same style as the church pulled down by the pirates in 1444 – a constant reminder to the people of Cadaqués – as Cap de Quers became known – that when there were Moors on the coast, the baluard was built to protect Sant Pere, not to be protected by it.

As the monastery grew in prestige, it became a place of pilgrimage as well as a safe haven for kings and bishops travelling to Rome from the palaces and courts in Spain and Portugal. With its cloisters, elegant stonework and high arches, Sant Pere is the region’s best example of Romanesque architecture and its influence lasted for more than five hundred years. The decline began in the 17th century after a string of pirate attacks. The monks abandoned the mountain top in 1793. They transferred to Vila-sacra, then moved again in 1809 to Figueres.

The ruin was declared a national monument in 1930 and renovation by the then Republican Government began in 1935. During the last seventy years, the time it took to build the monastery, much of the building’s early splendour has been restored. Sant Pere de Rodes today is a popular destination of tourist pilgrimage and string quartets on summer nights perform Baroque music in the long nave with its tall columns casting an endless net of crisscrossing shadows.