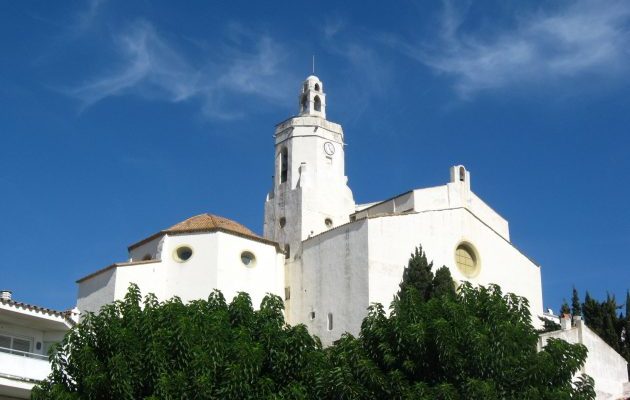 ‘Moors on the coast,’ someone shouted.

The men shielded their eyes from the sun and watched as a fleet of galleys crossed the horizon.

As the ships moved closer, driven by the jerking movement of the rowers, the watchman out on the cape could make out the square-rigged sails and long black flags snapping like dogs in the sea wind. He heaped pine needles on to the fire and lit it from a tinder box.

The bellringer in the church pulled feverishly at the ropes and the sound of the chimes bounced across the rocky landscape. Women gathered up their children and ran in all directions. Nowhere was safe.

The isolation of Cadaqués in 1444 was its saviour until the walls were breached. Then it became their prison.

The village of some several hundred souls stretched across the steep slope facing the sea. The men had carved blocks of grey stone from the hillside to erect defensive walls and built from the scraps squat boxy houses with slate roofs and small square windows.

The village inside the walls was a puzzle of narrow streets that led as all roads lead to Rome to the Church of Santa María, a Gothic fortress with archer slits, cork oak doors and the bellringer still sounding the bells.

Cadaqués was at the tip of a tapered peninsula cut off like an island by dense forests that covered the mountains and stretched further than a man could reach after running all day. The forests provided wild berries and mushrooms with caps twice the size of a man’s hand. There were herds of deer, wolves, boar, spotted lynx and hares that moved as fast as an arrow. The people cut dead wood for fuel and the trunks from mature trees to slice into planks and build fishing boats. With the seas filled with shoals of fish, Cadaqués could have been a coastal Garden of Eden. Except for the pirates.

Moors on the Coast of Catalonia

The village rose above a circular harbour with two extended arms of volcanic rock that, from a bird’s eye view, look as if a giant mouth has taken a bite from the coastline. At the entrance to the bay stands a fan-shaped atoll whimsically named Cucarucaruc that calms the fierce currents that run from the Gulf of Leon to the Gulf Roses.

The watchman tending the fire that day counted twenty-two galleys as they swept into the harbour and two hundred pirates raced ashore wielding sabres forged in the caravanserai on the north coast of Africa. The men of the village defended the walls, but fishermen and goatherds stood no chance against blood-soaked assassins. The Moors broke through the low arched gates and slaughtered everyone who stood in their way as they climbed the sheer stone streets that led to the synagogue.

Jews, Christians and Muslims had lived in relative peace since the Umayyad invasion of the Iberian Peninsula in 711. The ‘Reconqest’ of what the Moors called Al-Andalus was gathering momentum in the 15th century and the country had broken up into scores of taifas, city kingdoms. In Christian Cordoba, Valencia and Seville they were burning Muslims at the stake, while the Moors on the coast of Catalonia were pillaging the undefended fishing villages.

After razing the synagogue, the Moors with pointed beards and coiled turbans like beehives marched the short distance to the church. Here, ‘men of the one true faith’ stood guard with sharpened staves and an unshakeable conviction that the carved Madonna they had ornamented in gold leaf would heed their prayers.

To no avail. The invaders battered down the doors, executed the men and emptied the church of its gold crosses and sacred artefacts. The Muslim corsairs raided the Catalan littoral for the booty, oils, livestock and wine, but most of all they came for the precious treasure of the women and children they carried off to be sold in the slave markets in towns and cities from Tripolitania to Constantinople.

With the boats loaded with weeping women, the pirates delayed their departure long enough to take down the Church of Santa María stone by stone. They set fire to the roof beams, the statues riddled with worm holes, the pews polished by centuries of worship. They gazed into the flames as men have done since the discovery of fire, then threw into the blaze the hand-written scrolls containing the local records and accounts, removing, not only the people, but five hundred years of their history.

What happened to the bellringer that day, the priest, the watchman who lit the fire? No one knows. We remember the kings, brigands and traitors. The man on the wall and the woman with her crying baby are lost in antiquity’s imprecise celebration of numbers and dates; the year 1444, twenty-two galleys, two hundred pirates, five hundred years of history, the desecration and destruction of the church, the end of the synagogue, never rebuilt, and many dead.