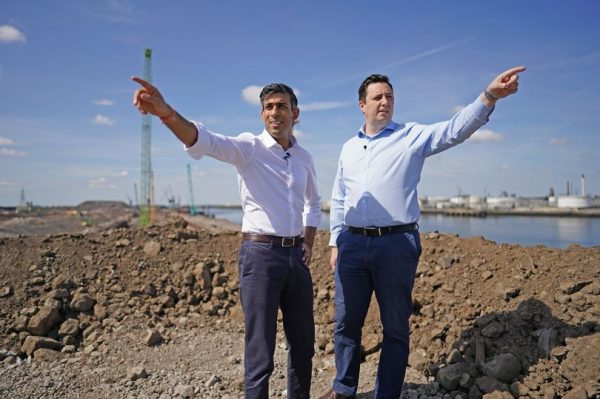 “That way!” Rishi Sunak and Tees Valley Mayor Ben Houchen know where we are going.

You. Me. Your neighbour. The postman. We don’t know who we are. You will never hear a Scotsman say he is British. Nor a Welshman. Catholics from Northern Ireland say they are Irish. Protestants say they are Loyal British Unionists to avoid saying what they are, Irish.

We have chosen Rishi Sunak – or rather Rishi Sunak was chosen for us – as Prime Minister, a diversity gesture that appears woke and modern. But just as we don’t know who we are, we don’t know that he represents us – the people of this country, whatever it’s called.

Rishi Sunak represents the rich, the elite, the tax dodgers, the military-industrial complex, uber-capitalism. It is a moot point, but it hard to imagine a man or woman of British heritage being made Premier of India.

We don’t know who we are and we don’t know where we belong. In Europe? The Commonwealth? The stray poodle of the United States. A deregulated Freeport of traders, lawyers and bankers sympathetic to oligarchs, drug lords and members of the aristocracy with their nice manners and passion for zero taxes?

Jonathan Harmsworth, the 4th Viscount Rothermere, earns vast profits from his media empire that includes the Daily Mail. He has a personal fortune of £1 billion, according to the Sunday Times rich list, and owns a stunning estate in Wiltshire called Ferne Park. Harmsworth backed the Brexit campaign and avoids tax by claiming non-dom status. He is domiciled in France and operates his affairs through a complex structure of offshore holdings and trusts.

Harmsworth donates to the Conservative Party and promotes through Daily Mail editorials policies that have resulted in almost 15 million people, 20% of the population, living in poverty, according to the Joseph Rowntree Foundation’s UK Poverty Profile 2022.

A fractured NHS with underpaid nurses and ambulance drivers on strike, human faeces in the rivers and on the beaches because foreign owned water companies suck out profits without investing in the infrastructure, the oldest and once the world’s best train network sold off cheap to private companies now in ruins.

The German state railway Deutsche Bahn operates four British railways including the London Overground and the Grand Central line to Sunderland. A proportion of the profits (subsidised by British tax payers) goes into the €6.5 billion pension pot invested for German rail workers.

Old folk in this nowhere land receive one of the lowest weekly pensions in Europe [UK – £141; France – £304; Germany – £507; Spain – £513] – and console themselves with memories of the Battle of Britain, photos of Kate Middleton with her pretty children and having won the world cup in 1966 – nine millennia after William the Conqueror’s Norman legions defeated England’s King Harold at the Battle of Hastings and put a Frenchman on the throne.

We Don’t Know Who We Are Singing For

National anthems across the globe evoke the history, traditions and hopes of the nation. European monarchies adopted royal anthems in the early modern period. They have died out everywhere except the United Kingdom where God Save the King/Queen was first performed in 1619.

Our anthem exalts a gracious and noble monarch and our desire for him/her to ‘long reign over us.’ Charles and Camilla – despised after Diana’s death and stealthily rebranded – are portrayed by the establishment-owning media as benign heads of state that bind the nation together, when in truth they represent the establishment that promotes them.

The Royal Family does not represent or donate to the poor and hungry, the ill-educated in broken schools, the mentally ill, the lost and homeless, the common people. With their coaches and crowns, palaces and £10 billion art collection, the Firm, as they call themselves, are the capstone on the privilege pyramid surrounded by insulated walls of landing-owning aristocracy, the titled, the Conservative Party, foreign billionaires and non-dorms.

Why the Billionaires Back Brexit

The people of these islands have been consistently tricked, lied to and manipulated by Conservative Party leaders, MPs and their mouth pieces in the right-wing press – the Daily Mail, Daily Telegraph, The Times, the Sun, the Daily Express.

There was never any question of Taking Back Control, levelling up or an extra £350 million a week going into the NHS.

The Mail-owning Viscount Harmsworth backed Brexit. The billionaire Barclay Brothers, owners of the Telegraph, domiciled in the tax-avoiding Channel Islands, backed Brexit. Australian born, US domiciled Rupert Murdoch, owner of the Times and the Sun, backed Brexit. The Daily Express was gobbled up in 2018 by a consortium of international investment companies including BlackRock Inc, and actively supports governments that keep taxes low with few regulations and controls labour with stricter regulations.

Why did these international billionaires back Brexit?

With Dominic Cummings’ slogan Take Back Control, Boris Johnson, Michael Gove, Jacob Rees-Mogg, Nigel Farage and a conspiracy of con artists convinced the British people that they were taking their lives and destiny back from the EU, when they were handing back what little control they had to a Conservative Party that set out to undermine the European Convention on Human Rights with what they saw as ‘too great an influence over UK laws,’ and allowed ‘domestic courts to depart from Strasburg case law.’

And, of course, the people of these small islands adrift in the cold North Sea lost the right to freely live, work, study, trade and start a business in Europe.