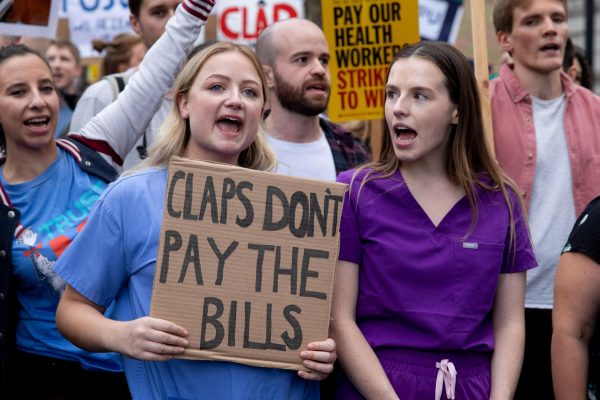 Nurses earning £30,000 a year work long shifts and then go straight to food banks because increased energy costs and inflation leave them too little to feed their families. Some hospital trust bosses on £300,000 a year have found a way to palliate the problem by installing food banks in their hospitals.

No comparable country in Europe has the same entrenched problems and demeaning issues – nurses paying to park their cars in hospital car parks owned by private companies, ambulances lining up in twelve-hour queues because there is no social care for people leaving hospital and an insufficient number of hospital beds for new patients.

Why are there insufficient beds?

Since David Cameron came to power in 2010, the Conservative Party’s cost-cutting agenda has obliged the NHS to axe 25,000 beds across the UK, according to the Guardian. Britain now has ‘the second lowest number of beds per 1,000 people in Europe.’ We have less doctors, less nurses and less people joining the professions. There are at present 132,139 NHS vacancies including more than 46,000 unfilled nursing posts.

The Royal College of Emergency Medicine said the huge loss of beds since 2010 has caused ‘real patient harm.’ Patients are increasingly distressed by long waiting times, as are NHS staff who face ‘mounting levels of burnout, exhaustion and moral injury.’

Are there striking nurses in Spain?

The coalition led by the Socialist Party (PSOE) in Spain has since winning power from the Conservative Popular Party (PP) doubled the minimum wage and created a minimum income for the poorest. Inflation in Spain stands at 7%, according to Economic Status. In the UK it is around 12%. Pensions in Spain are double what they are in the United Kingdom.

Spain provides a good comparison because it is not part of the G7, the seven richest countries in the world. The UK is. With a lower gross national product, fewer Spaniards suffer British levels of poverty, hunger, malnutrition, demoralisation, striking nurses and other auto-generated problems.

Spain had been marginalised in Europe economically and politically before joining the EU in 1985. As a member of the largest market in the world, economic integration turbocharged development and growth, baking a bigger cake with more to share. Few people in 1985 would have believed that British Airways would in 2011 be largely consumed by Spain’s International Consolidated Airlines Group (IAG) headquartered in Madrid. France and Holland own our trains. Qatar and China own our water etc, etc.

The great British sell off began in 1979 when Margaret Thatcher’s Conservative government adopted neoliberal policies that favoured the rich against the poor. Tax breaks for corporations and wealthy individuals came at the expense of cuts to public services, schools, hospitals, social care, mental care, old age pensions and public sector wages. Thatcher went to war with the working class just as Vladimir Putin went to war against Ukraine, and what Russia has inflicted on Ukraine physically, Mrs Thatcher and subsequent Tory prime ministers have inflicted on British working people psychologically.

That is why we must support striking nurses, railway workers, postal workers, baggage handlers, border force officials, teachers, civil service workers and all workers driven into poverty by their own government.

Current Prime Minister Rishi Sunak blames the current economic downturn in the UK on Covid and the war in Ukraine. But the problems that exist here in Britain also existed across the rest of Europe. In Scandinavia, Germany, Austria, Holland, France, Belgium, Spain, Portugal, Italy and Holland they have overcome those problems. In the UK, we have not.

Margaret Thatcher in 1979 said socialism was a wolf in sheep’s clothing and set out to destroy it by ‘rolling back the frontiers of the state’. Through policies that have brutalised working people for four decades, the democratic, more equitable society that our fathers and grandfathers set out to create after the Second World War has been dismantled piece by piece and now lay in ruins.