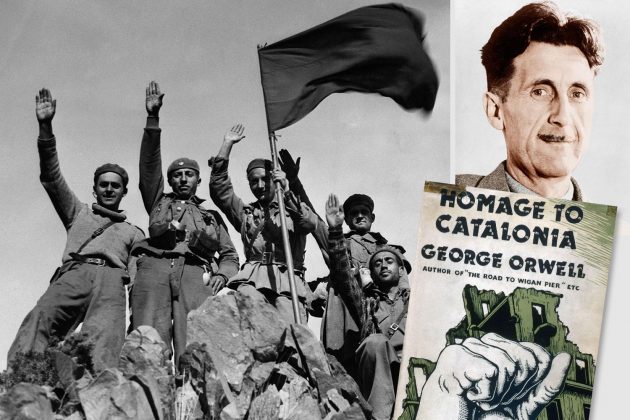 It was the day after Christmas in 1936 when George Orwell stepped off the train in Barcelona and followed his map to the recruiting office of the POUM (Partido Obrero de Unificación Marxista), where he volunteered to fight for the Republic in the Spanish Civil War.

What little I knew about the war before we moved to Barcelona in 1984 had come  from reading Orwell’s Homage to Catalonia. His great novel 1984, for obvious reasons, was back on the best-seller lists and we were living in the last dreamy days before Big Brother developed the face recognition cameras and digital technology that would track and trace each and every one of us in the new century.

Orwell was one of the many thousands of European intellectuals and workers who had set out for Spain in 1936 to defend the twice-elected Republic. They volunteered in the International Brigades, they joined militias of untrained field labourers and factory hands and fought on every major front in the war against fascism.

In Homage to Catalonia, Orwell describes the horrors and confusion of the battlefront, the near-fatal bullet wound that ended his time in Spain and the revolutionary euphoria of Barcelona where, ‘For the first time I had ever been in a town where the working-class was in the saddle.’

In Barcelona, he had seen glimmers of what he considered a better world. ‘The whole experience left me with not less but more belief in the decency of human beings. For several months large blocks of people believed that all men are equal and were able to act on their belief. The result was a feeling of liberation and hope. No one who was in Spain during the months when people still believed in the revolution will ever forget that strange and moving experience.’

That sense of common human decency Orwell observed in Barcelona lived on half a century later in the worn faces of the workmen in the barrio at the modest end of Calle de la Diputación where we had rented an apartment, a narrow sequence of small boxy rooms with cracked tiles and rickety furniture leaking dust that settled in small pyramids as woodworm drilled holes in the cabinets and chairs.

After a couple of hours getting some words down on the page, I would often wander down Diputación to the Café Zurich in Plaça Catalunya. The grand terrace that sweeps around two sides of the building at the top end of the Ramblas was the beating heart of Barcelona. It was the perfect place for people watching and meeting friends, but I was drawn more to the gloomy interior with its bullfighting posters, faded newspaper clippings and the oddly explicit blank space where the de rigueur photograph of Franco had finally been torn from the wall.

It was here, shielded from the gunfire, where Orwell shared his cigarettes with comrades between street fights and defending the Telephone Exchange from rival factions. Communist, anarchist and socialist militias making up the majority of the Republican alliance squandered their lives and bullets fighting each other over what kind of world they wanted to create when the war was over and doomed themselves to slaughter and defeat. Franco’s Nationalists were supplied with modern German and Italian weaponry. The Republic had little more than the fresh and blood of its loyalist troops and volunteers.

It is the malaise of the Left that everyone has their own vision of utopia, while the Right believes in a hierarchy where strong central leadership and class divisions based on wealth and tradition are inevitable, even desirable. On the Left we find idealists. On the Right, pragmatists, a far stronger adhesive.

Orwell’s belief in fair play and common human decency was the philosophy that drove his life and work. These virtues had been appropriated by the English, but are universal, and I found myself on the receiving end of human kindness every day. Waiters in tapas bars – there were few waitresses – would explain the difference been calamares a la romana and calamares a la plancha (deep fried squid rings and whole squid cooked on a hot plate). When I asked for directions, people were patient with my stumbling Spanish and went out of their way to lead me to my destination.

Daily life in Calle de la Diputación felt frozen in time, suspended in an old black and white photograph. The Catholic dominance over every aspect of society, coupled with the instinctive fear of the military, still hung in the air like the smell of bad blood nine years after Franco’s death. Barcelona was edging its way into the future without losing the values that had kept it loyal to the Republic.

As a result of their last stand in Figueres, Catalans suffered the wrath of the military junta longer than any other region. Even in remote villages, the feared Guardia Civil would shout ‘Speak Spanish’ at local people if they heard them speaking their native Catalan.

Presses printing books in Catalan ground to a halt. Singing folk songs was banned, as was the sardanas, the traditional dance where two or three people link hands and turn in a circle that widens as others join in. Smaller circles spin off like atoms into the centre of the main ring as the entire community takes part. The movements are complex. The dancers count five steps one way, three the other, their lips moving in mime. Catalans have a reputation for being canny with their cash and Spaniards from other parts of the country say they count coins, even when they’re dancing.

Catalans joined hands as a symbol of being Catalan, but the divisions that had torn the country apart during the war were deeply ingrained and, outside fiestas, people only went to the bars and cafés patronised by fellow-travellers.

Opposite our flat in Diputación was a bar named Marcelino’s with sawdust on the floor, legs of ham hanging from hooks and the abiding scent of black coffee and cigarette smoke. Workers at lunchtime ordered glasses of cloudy white wine cold from the barrel and ate the sandwiches their wives had made and wrapped in tinfoil. Marcelino’s was what the Spaniards call un bar de toda la vida, a home from home, a place where George Orwell would have shared his cigarettes with comrades who believed in fair play and common human decency.

See – The Origins of the Spanish Civil War – Part 7, A Brief History of Cadaqués

Love Dalí, my book Sex, Surrealism, Dalí and Me is FREE on Amazon Kindle US, UK, Spain etc.