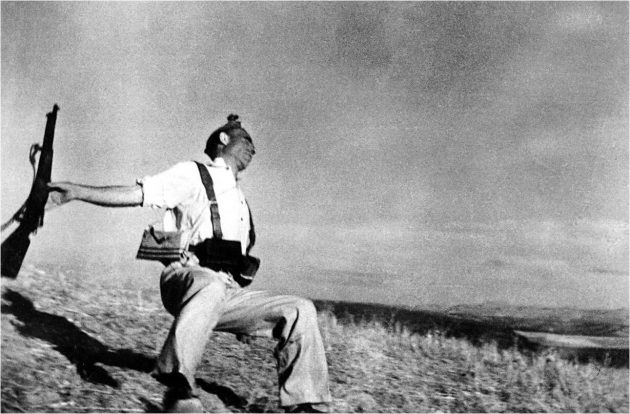 The Falling Soldier – Loyalist Militiaman at the Moment of Death; Photo Robert Capa, 1936

I knew nothing about the origins of the Spanish Civil War until we moved to Barcelona in 1984. General Franco had been dead nine years but his shadow loomed still over Spain like a cloud over the sun.

My wife Valerie had been offered a position at the British Council in Barcelona and we rented a long narrow apartment in Calle de la Diputación with ancient furniture noisy with the chomping of woodworm and floors and walls tiled in patterns from the belle epoch.

My first book, Carol Comes Home, the memoirs of the actress Carol White, had been published by New English Library, and I now had a literary agent by the name of Jeffrey Simmons who had, per chance, an efficient secretary named GG – Gladys Greenaway.

GG recorded the stories of minor and momentary celebrities, then sent me the tapes to turn into ‘kiss and tell’ articles and proposals for books. The work was neither satisfying nor gainful, but a writer must write every day and at least I was doing that.

Fortunately, everyone in Barcelona was learning English and I boosted my income working from six to eight weekday evenings as a teacher for Interlog. Writers are either morning people who come to the keyboard with the day’s second cup of coffee or night people who sip iced whisky in the moonlight. I’m the morning type and have always envied the more quixotic night-time scribblers with their absinthe eyes and knowing expressions.

With the mornings free for literary pursuits, I set off in the late afternoon across the grid of parallel streets to various banks and corporate offices that offered English classes to their staff. English was the lingua franca of what was being called the global world and Brits maintained a reputation for courtesy and noblesse oblige – privilege that embodies responsibility, a concept that seemed vaguely colonial. Football hooligans, illegal wars and Perfidious Albion would peel the scales from European eyes and I was lucky to arrive in Spain at the tail end of the myth.

A Dash of Humour 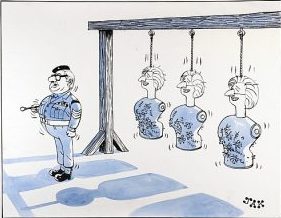 “Show a bit more agro you shower – this could be a matter of life or death.” JAK cartoon.

Although learning a language is a serious business, people retain more when you add a dash of humour. I printed out cartoons by Gerald Scarfe, JAK – Raymond Allen Jackson, and Steve Bell’s regular strip Maggie’s Farm. The comedy had to be explained, but that didn’t stop it being funny, and students would leave the class with a smile for our ten-minute break in the nearest bar.

After a caña served cold from the barrel, the atmosphere lightened and students who had remained silent in the classroom found the words to discuss their lives, their reasons for learning English and, most important, their dreams for Barça. Futbol Club Barcelona was the religion replacing religion and it was assumed that I had inside knowledge seeing how the new man at the helm that year was Terry Venables, the dynamic English coach who ended up winning La Liga that season by a 10-point margin.

Barça was the life blood of the body Catalan, the key to the Chinese puzzle that united the city and its people. Chief executives when they arrived for work at the new glass palaces shooting up along the Diagonal would stop to chat with the doorman about their grandchildren, the traffic, the news that Antoni Gaudí’s unfinished cathedral, the Sagrada Família, had been made a World Heritage Site. All Catalans appeared to have insights and opinions on art. Finally, shaking their heads, they would discuss the callous injuries and golden goals of team Barça.

The doorman in his peaked cap and the exec in his grey suit shared the same loyalties, the same aversions, and would have suffered or had families who had suffered in and since the Spanish Civil War. The English need little excuse to look back on the Second World War with a sense of nostalgia and national pride. For most Spaniards, the civil war had the opposite effect and touched the raw nerve of national shame.

Spain’s Second Republic – the first lasted briefly from 1873-1874 – had come into existence in 1931. A coalition of socialists, liberals and a handful of communists won two general elections, in 1933 and again, after three years of turbulence and insurrection, in February 1936.

The alliance had stood on a platform of land reform, female emancipation, a minimum wage and the creation of a national health service. It was the most advanced social agenda in the developed world and was viewed as a profanity by the Church, military and monarchists. 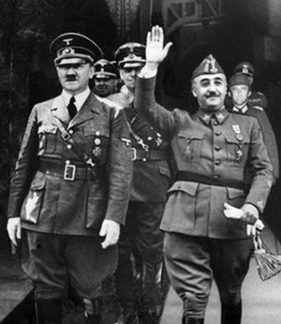 The government had been in office for four months when General Francisco Franco led the July coup that resulted in the three-year civil war in which a million Spaniards died or disappeared. The bloodletting came to an end on 1 April 1939 and Franco ruled Spain with an iron fist until his death thirty-six years later on 20 November 1975.

King Alfonso XIII had gone into exile in 1931 and occupied the Royal Suite at the Hotel Meurice in Paris. By coincidence or design, 30 years later, Salvador Dalí and his wife Gala moved into the same suite for two months every spring and an invitation to Dalí’s daily Princes’ and Paupers’ Pink Champagne Tea Party was highly sought after by the Parisian beau monde.

Catalonia had broadly supported the Republic in the civil war and was the last region to fall to Franco’s Nationalists. The Republic’s ultimate headquarters was at Castell Ferran, the military fort on the hill above Figueres. On the days leading up to the surrender, the town was bombed to rubble before Panzer tanks commanded by Germans mopped up the last meagre flares of resistance.

As thousands of militiamen and Catalan families fled the twenty-five kilometres to the French border at La Jonquera, they were strafed by Italian fighter planes. The refugees had no food nor medicines. Those injured by bullets and shrapnel bled out and their dead bodies remained on the side of the road for months.

Mussolini and Hitler had supplied arms and manpower to Franco from the outbreak of war. Germany’s Luftwaffe was given a free hand to practise bombing techniques and infamously in April 1937 obliterated the Basque town of Guernica in an aerial attack that lasted two hours and killed 1,500 people, the first blitzkrieg of the modern era.

Picasso’s masterpiece Guernica, unveiled at the Paris Exhibition in November 1937, was described by critics as the most powerful anti-war painting of all time. Legend has it that a German official visiting the pavilion where the painting was on display asked Picasso:

While Germany and Italy had backed the mutinous Generals, Britain, France and the United States remained officially neutral and starved the Republic of arms, food and medical supplies. They made innumerable concessions to the fascist states and only as German storm troopers goose-stepped across Europe in 1939 did they acknowledge that the war on democracy in Spain was merely the dress rehearsal for the Second World War, concentration camps, the Holocaust and the Iron Curtain descending over Europe.

King Alfonso had died of heart disease in 1941. After Franco’s death, the late king’s grandson, King Juan Carlos I, was restored to the throne and the new Spanish Constitution of 1978 established a parliamentary democracy.

After a series of weak coalitions, the threat of military rebellion and rising unemployment, Felipe González in 1982 led the PSOE, the Spanish Workers Socialist Party, to power with a centrist agenda remarkably similar to that set out by the self-same political party in 1936.

Spain had been holding its breath for forty-six years and has still not expelled all the foul air.

Love Dalí, my book Sex, Surrealism, Dalí and Me is FREE on Amazon Kindle US, UK, Spain etc. Also book and audio.