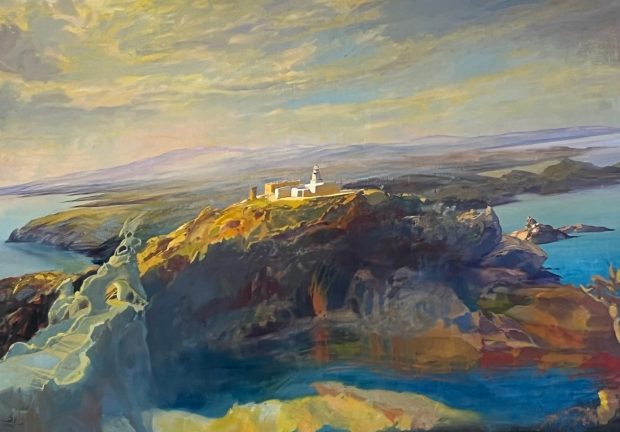 The birth of Cadaqués did not come about by chance. In the year 945, thirty years after the completion of the great monastery Sant Pere de Rodes, the wily abbot had a plan.

With a party of broad-shouldered monks, the abbot set out on the sixty minute journey from the gates of the monastery, down through the forest to the coastline. From there, with his crew of oarsmen and the wind filling the lateen sail, he would normally travel south to trade meetings in Roses or north-east across the Mediterranean to Civitavecchia, the Port of Rome, to report to the Pope on the activities of the Benedictine Order in Spain.

On this particular day, the abbot was making an excursion to explore the bay a short voyage around the coast. For two hundred years, French monarchs – beginning with Charlemagne – had colonised much of Catalonia and the abbot was about to make a power play to extend his own sphere of influence.

The bay nestled at the end of a narrow peninsula hidden by what became known as Montgrí and the Pení. These soaring cliffs carpeted in mature trees were the last two foothills of the Pyrenees, the seven hundred-kilometre range of peaks that run like the spine of a dinosaur from the Atlantic to the Mediterranean and divide Spain from France, the eternal enemy.

This happenstance of geology provided a safe harbour with a narrow entrance and one of the deepest bays on the Mediterranean, an unexpected bonanza in the mid-19th century when the grape blight Phylloxera wiped out the French vineyards and the village born from the abbot’s vanity grew rich exporting wine on square-rigged clipper ships to thirsty ports all over the world.

Modern generations like to think fishermen were casting their nets and living from the fruits of the sea in Cadaqués at the tail end of the first millennium, but it is highly unlikely. A thousand years before the wine windfall, the stretch of inlets was known simply as Cap de Quers – Rocky Cape, the ragged outcroppings that planted the foundations for the birth of Cadaqués.

Seafarers from ancient civilizations – Greeks, Phoenicians, Romans – may on stormy days have stepped ashore in the small coves of Poal or Pianc, or across the bay in Sa Sabolla, but left no relics or traces that have ever been found. There were no paths from the interior, no road following the coast, nothing but deep forests with howling beasts and the steep bluffs of rock rising six hundred metres above their heads. Cap de Quers was inhospitable, too isolated from other communities with which to trade, the oil of evolution and, ultimately, survival.

What the abbot from Sant Pere had in mind was to build an outpost. The work would attract artisans, fishermen, weavers and herders. The hamlet would produce fresh provisions for the monastery and provide the first line of defence when there were ‘Moors on the coast,’ a phrase still in common use, although now more frequently in the negative: There are no Moors on the coast, meaning there is no danger.

For hundreds of years, the risk of pirate attacks was constant. All along the shoreline, communities erected stone towers that lookouts climbed using rope ladders they drew up behind them. If they sighted pirate ships at sea, they would shout, ‘There are Moors on the coast,’ ring bells, light fires and run for their lives.

The watchtowers provided a warning but afforded scant protection and the abbot had a perceptive new strategy, a blueprint for man’s hand to reshape God’s creation.

The Birth of Cadaqués in Shades of Grey

Viewing Cadaqués from the bay, to the north beyond the beach, the land rises in steps that grow steeper as it climbs Montgrí. On the south side, between Port Dogué and the position where the restaurant Es Baluard stands today, the rocks surge from the sea, forming a natural fortification with tall, rounded walls.

After years building Sant Pere, the masons who had made their homes close to the monastery in Santa Creu de Rodes would have been employed to cut blocks from the mountainside to complete a defensive circle as it rose to a high platform with a view of the horizon to match that of the sentries in their towers along the coast.

Catalan writer Josep Pla describes the abbot’s defensive structure as a castillo, a castle. But there were no columns or tableaux of biblical scenes, just roughly hewn walls in what would be better defined as a stronghold, or a bastion – in Catalan, baluard, the word borrowed sagely to name the present-day eatery.

When the baluard was first built, it would have appeared from the distance on misty days to be floating on the waves, a storybook castle from the pages of the contemporaneously written Arabian Nights. The volcanic rock called pizarra, from which the entire Cadaqués peninsula is formed, is a hard slate that changes colour as the light of day constantly changes: silvery-blue, pearl grey, lead-grey, sometimes ethereal, at others melancholic. 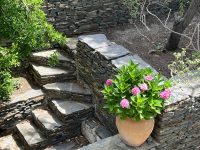 The pizarra was used to construct dwellings, surface paths, line wells and water channels. In the early 1800s, when the French were fighting the grape blight, the fishermen cast their eyes over the land, not the sea. They dug out the grey slate as if it were gold and erected tiers of dry-stone terraces where they planted the vines that would grow the wine with, as Salvador Dalí said, the ‘bitter taste of tears.’ The terraces are a masterpiece of creativity and engineering, built rapidly and forming a giant work of art.

The monks raised a temple at the stronghold’s highest point where the ‘new’ Church of Santa María stands today. With its buttressed walls that take on a rosy glow in the setting sun, the 16th century Gothic style edifice was built on the same site and in the same style as the church pulled down by marauding pirates in 1444.

Below the church, bleached white houses with a faint blue tinge descend to the shoreline like marble tombstones. The dry-stone walls burn like zinc on September days and the sky at sunset grows as big as a Turner painting as it turns through an endless variety of pinks, pale greens and fiery red.

The name of the Benedictine abbot who envisioned a baluard in Cap de Quers a thousand years ago is lost to history but his creation remains a surreal stronghold protecting its denizens from the prosaic world beyond Montgrí and the Pení.

Love Dalí, my book Sex, Surrealism, Dalí and Me is FREE on Amazon Kindle US, UK, Spain etc