Blowin’ in the Wind was a song drifting through the ether waiting for someone to reach out and grab; a lyric ‘that the times seemed to call forth,’ to quote critic Greil Marcus. Dylan scribbled the words down in ten minutes, he said. ‘If I hadn’t written it, someone else would have done.’ 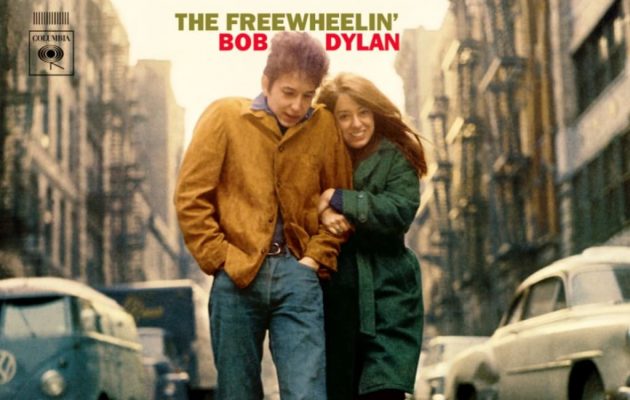 Blowin’ in the Wind is the anthem on the sixties, the era’s first great protest song and earned Dylan the nomenclature ‘protest singer,’ which he abhorred and denied.

‘I don’t write protest songs. I ain’t no protest singer,’ he told the crowd at Gerde’s Folk City in Greenwich Village in the spring of ’62 when he played the song for the first time. Dylan was too young for labels. He didn’t want to be put in a box. You put dead people in a box. He wasn’t dying. He was busy being born. He was 19 and felt the air growing warm beneath his wings. He wasn’t protesting. He was observing. Reporting. He didn’t ‘do’ politics. He was a storyteller, a song and dance man, a chameleon. The Mystery Tramp. Bobby knew once they pinned a label on him the glue would stick for life.

Just Blowin’ in the Wind

Who was that teenage boy from Minnesota with puzzled eyes, a guitar on his back, a harmonica caged around this jaw?

The answer is blowin’ in the wind, in the endless jingle-jangle of reeling rhymes and rhythms, words to gather in as if they are the tears of rage for a world gone wrong; the raindrops falling on your shoes as you set out for your own east coast; a plea for the countless confused, accused, misused, strung-out ones and worse.

Dylan recorded Blowin’ in the Wind at the Columbia studio in New York City on 9 July 1962. By the time the track appeared on The Freewheelin’ Bob Dylan 12 months later, Peter, Paul and Mary had taken Blowin’ in the Wind to the top of the pop charts and the anthem was embedded in the public consciousness.

I Have a Dream

The trio sang Blowin’ in the Wind before Martin Luther King Jr gave his ‘I Have a Dream’ speech at the National Mall in Washington DC on 28 August 1963 before a crowd of 250,000 people. By then, everyone knew the words and Dylan had become, whether he liked it or not, the voice of his generation.

‘I looked up from the podium and I thought to myself – I’ve never seen such a large crowd,’ Dylan recalled in Martin Scorsese’s 2005 documentary No Direction Home. ‘I was up close when King was giving that speech. To this day, it still affects me in a profound way.’

Blowin’ in the Wind opens with the words: How many roads must a man walk down, before you call him a man?

Dylan wrote the lyric a year before King’s speech, that first line by a nineteen year old from north of nowhere a call for equality, freedom, racial justice and social change that’s been a slow train time coming and still hasn’t arrived.

Dylan sings Blowin’ in the Wind live in 1963