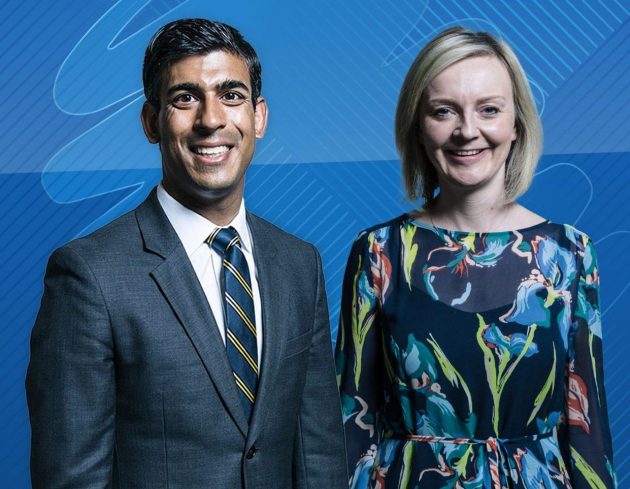 We are trapped between the devil and the deep blue sea. Excuse the cliché. That is the choice. God help us. The tricky, smooth-talking devilish three-quarter billionaire and former American Green Card holder Rishi Sunak and the deeply out-of-her-depth, obnoxiously silly and profoundly dull Liz Truss.

Following in the footsteps of war leader Winston Churchill, Labour’s visionary Clement Attlee, who created the NHS, and Liberal social reformer David Lloyd George, Britain in September will see standing outside 10 Downing Street with a grin of disbelief either the Thatcher-clone Foreign Secretary or the party boy convicted Thatcher-clone ex-Chancellor.

That is the choice God help us

Following Conservative Party rules, the choice will be made by the 180,000 members who have paid their £25 a year and remained – beyond the call of duty – loyal to the party through the years of austerity that has seen the number of people in need of food banks rise since the 2008 recession from 26,000 to more than 2.56 million.

They have watched the post-Brexit UK economy shrink by 4% with the loss of the large pool of EU labour the market relied on. Small businesses have been suffocated by red tape and trade with the EU is 15.7% lower than it would have been had Britain remained in the single market and customs union.

We have a shortage of pilots, baggage handlers, teachers, doctors, nurses, lorry drivers, catering staff, field workers and fruit pickers – and, for the first time since records began, there are more job vacancies than unemployed people.

What happened to all the workers?

Some 1.8 million Europeans went home to pick their own fruit, drive their own trucks and build up their own health services in such a way that saw Britain as the mourning man of Europe with the highest number of deaths from Covid in proportion to the population.

The coronavirus masked the damage leaving the EU caused to the UK and the 180,000 Conservative Party members (less than half of 1% of the population) will be sitting in their conservatories sipping Pimm’s through the mad dog heat of August pondering their historic choice, Sunak or Truss. God help us all.

Who are the members who have paid their dues and have the chance to select the next Prime Minister? According to Prof Tim Bale, co-author of Footsoldiers: Political Party Membership In The 21st Century, the party is made up of more men than women with 40% over the age of 65, and around 95% identifying as white British. The vast majority of members are classed as ‘ABC1s’, a social demographic made up of the better off ‘upper middle class.’

Liz Truss, the opportunist, a convinced Remainer when Cameron looked like he could piggy back her up the greasy pole who switched to Brexit when she saw the glint in Boris’s eye. She blathers on nonsensically about pig markets and cheese. She dresses up, as little girls do, as Margaret Thatcher, and travels with a photographer, as little princesses do. Liz Truss has promised to cut taxes and ‘and make sure every single person in Britain can reach their potential.’ She does not say how and tax cuts will not help underfunded schools where potential begins.

Rishi Sunak! There is a clip of him – search the web – saying he has friends in every class, aristocrats, the upper-class, working-class … and he pauses, ‘Well, not actually working-class.’ That’s the point. His every act and deed as Chancellor was to help those aristocrats, oligarchs and newspaper barons with tax rebates and concessions beyond the scope or reach or imaginations of the working-class people he does not know or want to know.

Sunak or Truss? That is the choice. God help us.