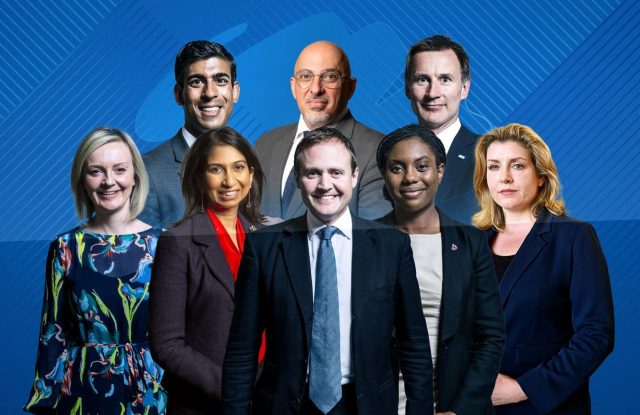 They all want to be Prime Minister

Rishi Sunak should not be racing to be Prime Minister. He should be in prison. Such is the quality of the eight candidates who have set their sights on No 10.

With his wife Akshata Murty, Sunak at 42 is worth an eye-watering £730 million – a sum beyond the vision or imagination of the working-class people he wants to ‘serve.’ The former Chancellor grabbed back the £20 a week extended to people on Universal Credit during Covid while buying tiles for his new swimming pool at £20 a time.

Sunak has a criminal conviction for partying during lockdown. He illegally kept his Green Card – dream of immigrants to the US – and allowed his wife to maintain non-dom status while living in the UK to avoid paying taxes, a deception only remedied when they were caught.

Mr Sunak is the bankers’ favourite.

In prison for a Long Term

Jeremy Hunt with his wide eyes and boyish smile is a liar. A fantastic liar. Far cleverer than Johnson. He should be in prison.

Hunt spent five dedicated years carrying out the policy of Margaret Thatcher to undermine and privatise the NHS ‘by stealth.’ That was the word used by Thatcher’s adviser Nicholas Ridley, who feared there would be riots in the streets if the public knew they were selling off at cut-down prices chunks of the health service they had built and paid for.

They did and continue to do so. Today 40% of the beloved NHS is in the hands of private companies, mainly in the US.

Liz Truss comes from a working-class family and votes consistently, proudly, for laws and policies that will damage the working-class. Funny that. In fact, Liz Truss is a very funny person who had us splitting our sides at the Tory Party Conference when she told the audience ‘We’re producing more varieties of cheese than the French, and we are selling tea to China,’ pause. ‘Yorkshire tea.’ There’s more on YouTube. Hilarious, unbelievable. And this woman wants to be Prime Minister.

Truss was a Remainer and cuddled up to Cameron to win a place in his Cabinet. When Johnson defenestrated Cameron, Our Liz in a Road to Damascus moment switched religions, cosied up to Johnson and became a proselyting Brexiteer. She is a deceitful, two-faced woman who travels with a photographer and would make an ideal puppet for the Tory 1922 Committee and the people behind the scenes who really run the country.

A Man of Property

The Daily Mirror has revealed that new Chancellor Nadhim Zahawi’s £100 million family property empire is funded with a mystery £30m loan from ‘other creditors.’ Mr Zahawi founded and ran the polling firm YouGov and continued (quietly) to advise the firm while an MP. He also continued to earn large sums through a string of lucrative second jobs, including £1.3m from one oil company.

Is Zahawi running for No 10 because he has a deep passion to save the British people after 12 years of Tory lies and mismanagement? No. Like Hunt, Truss and the rest of them, he just wants to be Prime Minister.

He should be in prison and will be if Scotland Yard are de-politicised and put on the case.

Penny Mordaunt is the clean cut lady from the shires with an earthy smile and a heart of stone. Her voting record is one of suppressing any help for working people and every hand out going for the rich and the bankers.

Mordaunt voted for a reduction in spending on welfare benefits and against raising benefits in line with prices. She voted to reduce housing benefit for tenants deemed to have an extra bedroom (which Labour described as the ‘bedroom tax), and against spending public money to create guaranteed jobs for young people who have spent a long time unemployed.

To keep her extreme-right values polished like the family silverware, Ms Mordaunt has consistently voted to reduce corporation tax and for mass surveillance of people’s communications and activities. She voted for the disastrous privatisation of Royal Mail and against measures to prevent climate change.

She will make an excellent Prime Minister for the corporations, oil companies, American pharmaceutical giants carving up the NHS, the arms industry and every dodgy landlord, gang boss in the construction industry and chums who hide their money in secret accounts and don’t pay tax.

Three more no hopers bring the race to eight:

Tom Tugendhat is the ‘clean start’ candidate who has only ever done one really ‘naughty’ thing and that was serve as a soldier in Iraq and Afghanistan. Funnily enough, he believes, according to Sky News, in reducing corporation tax and the creation of an ‘investment-friendly tax system.’ As if it isn’t.

Former equalities minister Kemi Badenoch promises to ‘cut the size’ of the state and lead a ‘limited government focused on essentials.’ She supports lower taxes ‘to boost growth and productivity.’ Growing up in Nigeria, she told her campaign launch, she has ‘seen what happens when politicians are in it for themselves … using public money as their private piggy banks.’

Attorney General Suella Braverman has promised ‘rapid and large tax cuts’ to ease inflation and to ‘move heaven and earth to get this country back on track.’

She spoke of delivering ‘all of the great opportunities’ of Brexit, as well as taking a ‘firm line’ on migration. In a Twitter post, Ms Braverman said the UK ‘must leave’ the jurisdiction of the European Convention on Human Rights.

The eight people running to be Prime Minister tell us, hands on hearts, that they want to get the country back on track and do not see the sad striking irony that they have all been there through the years when it went off track. They got their shove up the ladder from Boris Johnson. They were not his adversaries. They are his accomplices in a great crime against the British people and their promises are straight out of the hard-right playbook: control the foreigners and do not under any circumstances give more money to the poor when that money can go to the rich in tax cuts.