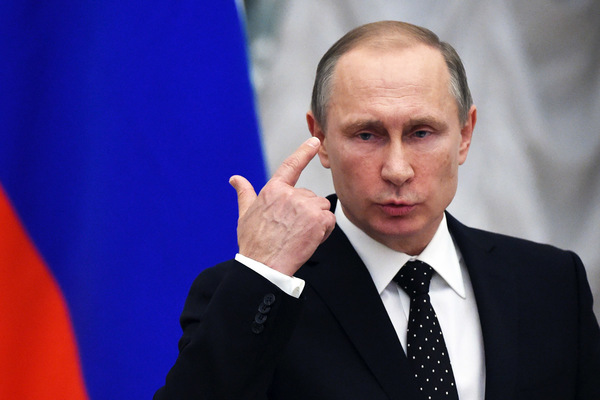 Putin has this eye on us all.

Putin’s war must go on if he is to achieve his long-term and widely misunderstood intentions.

Had Russia set out solely to seize Ukraine, destroying its infrastructure would have been an absurd and reckless policy costing decades and billions in reconstruction.

But the land battle is secondary to Putin’s goal to demoralise the west and re-establish Russia’s soviet-imperialist position on the world stage.

While we watch on our TV screens grand European cities being bombed to dust by Russian artillery, we are already suffering a sense of stress and impotence.

It is men on the front line and children in their beds who are dying, but the fog of war clouds the eyes of politicians in Europe and across the Atlantic in Washington.

While the western powers are unable to force open safe routes across the Black Sea, precious grain stocks rot on the dockside, bankrupting Ukraine and starving millions in Africa where the people may come to see their future better served at the bosom of Mother Russia than the European aid agencies with their quid pro quo philanthropy.

Putin’s war must go on long enough to divide Europeans thirsting for the cheap oil and gas needed to combat the rocketing prices driving their downtrodden citizenry into deeper levels of poverty and rebellion.

Should the west mediate for a quick settlement that ends sanctions and provides Russia with dignity and the Donbas? Or arm Zelenski to the teeth and push Russia back to its pre-24 February borders?

While there is no agreed strategy, the slaughter continues. In the first official announcement of casualties, Kiev puts the number of Ukrainian soldiers killed in combat at 10,000. Russian losses are estimated at 32,000. Not that Putin acknowledges nor loses sleep over deaths on the battlefield. He is a born again Tsar painting a self-portrait in blood.

War Must Go On Forever

The Russian bombardment of the civilian population in Syria in 2015 caused the exodus of six million people; nearly four million remain in rat-infested refugee camps in Turkey.

Nigel Farage’s posters showing a snaking line of women in headscarves pressing at Europe’s borders terrified Brits in rundown communities often surviving on EU grants they didn’t know they had or would lose when they were duped by the propaganda into voting for Brexit.

The British people did not know, and the Conservative press owned by billionaires supporting the Leave Campaign didn’t inform them, that Brexit was solely and uniquely about the movement of Europeans, that migrants from Africa and Asia before Brexit would face the same labyrinthian routes into the UK after Brexit as they did before – legally with a visa or across the Channel in a rubber boat.

Brexit was an enormous success for Vladimir Putin who wants to break Europe up into small bite sized pieces he can gobble down whenever he’s peckish. The Syrian refugee crisis was one side of a two-pronged assault. The second was his cyber war attacking information systems KGB-style backing Leave and undermining Remain.

Right-wing parties across Europe attract support by blaming the EU for all fiscal and social woes and pledging to leave the Union as their central policy. These parties have paid obeisance to and taken funds from Vladimir Putin. They include Marine le Pen in France, Hungary’s Prime Minister Víktor Orban, Heinz-Christian Strache from Austria’s Freedom Party, Matteo Salvini’s Lega Party in Italy and Giorgia Meloni, the homophobic, anti-immigrant leader of Brothers of Italy, who could after elections in 2023 become Italy’s first fascist prime minister since Mussolini.

Based on Electoral Commission information reported in the Guardian, it is estimated that Russia or Russians have given £1.93 million to both the Tory Party and constituency associations since Boris Johnson became prime minister. Johnson rewarded the oligarchs by making Evgeny Lebedev a member of the House of Lords. This son of a former KGB spy and intimate of Putin now has the rare privilege of voting on British laws.

What Russia gets in return for its financial largesse is political support at key moments. In 2017, French far-right MEPs supported the annexation of Crimea. In 2018, Salvini vetoed EU sanctions against Russia. In May 2022, NewsLines Magazine detailed how Kremlin operatives allegedly draft pro-Russian talking points and amendments for European neo-fascist MEPs to propose in the European Parliament.

After the Brexit referendum in June 2016, Putin turned his sights on the White House. According to Reuters, an army of Kremlin operatives hacked Democrat emails and created a web of inter-linked websites that appeared to be gun-toting true blue American. They published and shared streams of fake news articles that endorsed Trump and denigrated Hilary Clinton. Headings such as ‘The Pope Supports Trump’ and ‘Hilary Suspected of Murder’ went viral, adding to the headwinds that blew Donand Trump into office.

Putin not only created a valuable ally in Trump, he was able to manipulate the naive new President into making anti-democratic policies that were advantageous to the Kremlin’s xenophobic and popularist view of the world. The Supreme Court voting to end the rights to abortion and the right to carry concealed weapons is essentially a Christian Fundamentalist show of power. We, the rich white minority, own and run this country and what rights you do and did not have are in our gift.

Putin’s war must go on in order to bolster Republicans in the mid-term elections in November 2022 when Joe Biden may well lose his majority as well as his ability to carry on sending arms to Ukraine.

Then, of course, the 2024 US Presidential election will rise over the horizon with Donald Trump or some isolationist Trump doppelgänger likely to seize the White House and abandon NATO and Europe once and for all.

Putin’s war must go on and will go on until Putin is dead.

Read … The Bombing of Guernica