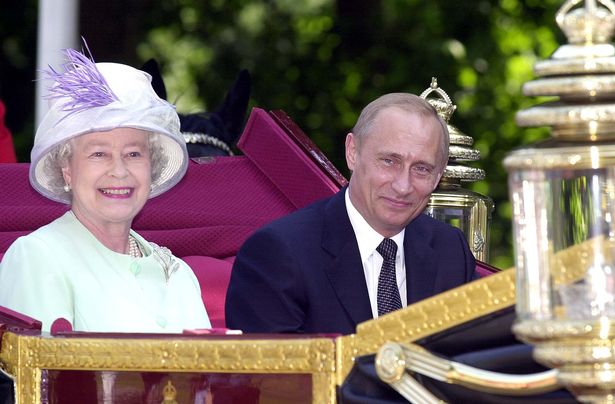 The Queen and Vladimir Putin – rule by divine right.

In the early days of exploration and conquest, a strong leader would seize new lands and make himself king. He would raise his flag over the vanquished and rule by divine right.

Holy men travel in the shadow of kings to proclaim the slaughter Holy War and draw up official documents to legitimise the new authority.

The priests are rewarded with property and put in charge of education. Their job is to instil in the people the belief that they are blessed to have a place in this land with a king chosen by God.

The perfect example of this is provided by present day Britain where the Archbishop of Canterbury, the former Prime Minister Boris Johnson, and William, the king to come, all went to the same school: Eton.

Similarly, King Charles, as the head of the Church of England, will rule by the Grace of God. James I (1566–1625): put it this way: ‘The State of Monarchie is the supremest thing upon earth: For Kings are not only God’s Lieutenants upon earth, and sit upon God’s throne, but even by God himself they are called Gods.’

Rule by divine right is always extended down the generations. There are 809 hereditary peers in the House of Lords who make laws for no other reason than their father was a lord and their grandfathers were charismatic bullies who robbed, slaughtered, lied, had priests write deeds for the land they stole and sent their sons to Eton.

The Arab Spring a decade ago was a grassroots uprising demanding democracy and civil rights. There were mass demonstrations in Bahrain, Saudi Arabia, Kuwait, Oman, Jordan, the United Arab Emirates, Qatar, Tunisia and Egypt. The sheikhs, emirs and monarchs in these lands have the worst records on human rights in the world. None were unseated due to their heavily armed national guards and vast wealth carefully invested in every major economy on the planet.

It is easy to forget that the police, secret police and armed forces are employed to protect them, not us.

In modern Britain, rule by divine right is ancient, subtle, so deeply woven into the lives of the people, they see the Royal Family as their family and stick pictures of them in the family album. King Charles III will become omnipresent, his face on every coin and banknote. While Prince Andrew has been stripped of his titles to protect the brand, Kate and her pretty children are likewise omnipresent on the covers of magazines everywhere.

When I was a Boy Scout, I mouthed the oath: ‘I promise that I will do my best to do my Duty to God and the Queen.’ It was a special honour to be asked to carry the Union Jack into church for the Sunday service when we reiterated the myth: ‘And did those feet in ancient times walk upon England’s green and pleasant land.’ We so desperately want to think so.

In this the sixth richest country in the world looked upon benevolently by God, it then comes as a shock that under Britain’s divine monarchs, people suffer grotesque levels of hunger and hardship: ‘4.3 million children live in poverty in the UK. That’s 30 per cent of children, or 9 in a classroom of 30.’ 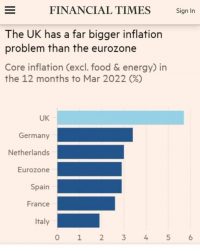 Cost of living in Europe. The Financial Times

The cost of living crisis is blamed on Covid, rising energy prices and Putin’s war on Ukraine. While price hikes are happening across the world, in the UK after fourteen years of hardship and austerity, inflation runs at double that of the rest of Europe and the pound has sunk to its lowest level against the dollar since 1985.

The first foodbanks sprang up in 2004. Their growth has become normalised with the trickle growing to more than 1,300 run by the Trussell Trust and a further 900 independent food banks. The present government shows little concern. ‘The rapid increase in food banks, the Guardian reports, shows a “rather uplifting” picture of a compassionate country,’ according to Tory MP Jacob Rees-Mogg.

What has this got to do with our old Queen and new King?

The Monarch is the head of the advisory body, the Privy Council. Charles is now one of the richest men in Britain, one of the richest in the world. The art collection he has inherited without paying one penny in tax is worth roughly £10 billion (billion). He owns palaces, vast estates and stretches of the coastline leased to we the people to plant the white bladed mills of wind farms.

Around the King in concentric circles are his lavishly subsidised family, the dukes, lords and the landowners from whose ranks our top civil servants, security chiefs and politicians are chosen. Two in every three prime ministers went to Eton and most of the rest went to top public schools attended by the 1% of the 1%. Truss is an exception and, as a covert to the far right, she is more extreme, more anti-Europe, more royalist and nationalistic than her predecessor.

Since the time of James I, rule by divine right has allowed aristocratic and royal families to live like Gods while generation after generation of repressed adoring peasants have shed their lives in wars, slaved in satanic mills, the coal mines, conveyor belts and ten hours a day at factory benches. Industry collapsed in the UK – though not everywhere in Europe – after Thatcher’s war on the working class. Now nurses not worthy of a 2% pay rise are ground down in our broken NHS hospitals and working families are unscrewing the lightbulbs to save on their electricity bills.

In recent history, every country in Europe has been occupied by a foreign foe except Britain. This mixed blessing gives the British their misplaced feelings of superiority and English Exceptionalism. People are persuaded by incessant propaganda in the Tory press to disdain Europe, loathe foreigners and love their King, their flag, their difference. They live with the delusion that everything in the country is the best when, since the late 1970s, Britain has tumbled down every measure of social well-being.

Across Europe, working people receive better wages, pensions, health services, social care and largely enjoy free university education. For every 3 doctors in the UK, Italy has 4, Germany 5, France 6. The UK is fifth from the bottom among 27 European countries for infant mortality.

Since Brexit, British people have lost freedom of movement, diminished union and human rights. New bills going through Parliament will restrict the right to demonstrate and provide police with greater powers.  When the poor and hungry rise up in revolution, Her Majesty’s Police Force will be there to break their heads and shower the streets in their blood.

The hhotograph above shows the Queen with the mass murderer Vladimir Putin. Just doing her job. Her uncle, Edward VIII, was fond of Nazis. Her grandson Prince Harry went to a fancy dress party costumed as a Nazi with a swastika armband. Just a bit of fun.

The Royal Family refer to themselves as ‘The Firm.’ For seventy years, Queen Elizabeth II increased the family net worth many fold and clung to power more successfully than any Head of State in the last 500 years. They are not the ‘people’s’ Royal Family. They sit at the top of the pyramid of wealth and privilege and are an integral part of the austerity, pain, hunger and poverty inflicted on working people by successive governments backed by their propaganda aides-de-camp in the right wing press.