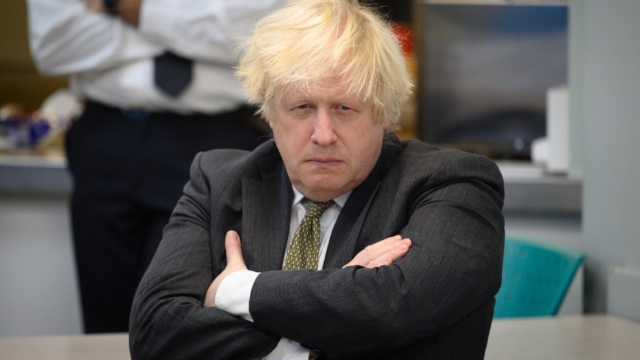 This is a message for the red wall voters who chose Brexit in the Referendum and Boris Johnson in the General Election: You’ve been:

You chose Brexit to take back control and lost what little control you had – the freedom to live, work and start a business abroad; let your kids go abroad to study and work. You chose the lie that Brexit would result in:

It’s not your fault. You made this life-changing error of judgment because the Leave Campaign made you afraid of immigrants – that Nigel Farage poster showing a line of refugees pressing against the EU border, and Johnson’s lie that Turkey was about to enter the EU and 80 million Turks would be moving into your street.

Migration Message for the Red Wall

Brexit was about Europe. Only Europe. That’s the truth red wall voters were unable to hear and the Daily Mail, Sun, Times, Telegraph, Express and alt-right websites never made clear. Brexit prevents European people and goods flowing freely to the United Kingdom and British people and exports flowing freely to Europe.

Nothing changed except more people have set out and succeeded in entering the UK illegally since Brexit than they did before Brexit. And more frightened, wretched people have drowned in the English Channel trying to reach our shores in leaky boats and rubber dinghies.

Here’s another message for the red wall: in those countries over which many Brits feel superiority – France, Italy, Luxembourg, Germany, Holland, Sweden, Denmark, Norway, Finland, Austria, Belgium – they all have a higher standard of living than we do.

Brexit has widened the gap.

We have more poverty, more food banks, more obesity, and one of the highest infant mortality rates in the developed world. One in four 16-year-old English boys have the reading level of a child of eleven. Education standards are lower now that they were during the Great Depression of the 1930s.

Students at English universities pay fees of around £9,000 a year. University education is free or there is a token charge across Scandinavia, in Germany, France, Poland, Greece, the Czech Republic and Iceland. The UK followed the US model and turned education into a commodity. The richer you are, the more you pay, the better schools and schooling your kids get.

As for the other 93% of state school children, they are considered no more than cannon fodder, zero-hour contract fodder, ‘the great unwashed,’ as aristocrats like to say, children who don’t matter who grow up to become adults who don’t matter.

Mrs Thatcher said there is no such thing as society. Her malevolent offspring Boris Johnson and his minime female version Liz Truss have ripped apart the last threads of the social fabric weaved together to create the NHS and welfare state in 1948 by the men and women who came home from the Second World War and wanted to build a better society for all.

I hope red wall pensioners are sitting down as we compare weekly pensions: 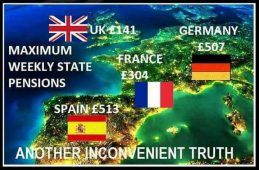 According to a report from the Organisation for Economic Co-operation and Development (OECD), pensioners in the United Kingdom receive around one third – 29% – of a working wage when they retire, compared to the OECD average of 63%.

The United Kingdom is actually the worst country in the category ‘pension percentage of pre-retirement earnings’ at just 28.4 percent. The figure does not come from the Daily Mirror. It comes from the barmy right-wing rag the Daily Express!

In contrast, Italy is 91.8 percent and Luxembourg 90.1 percent. Iceland, Denmark and Portugal are more than 85%.

The Conservative Party coupled with its newspaper barons, corporate interests and the monarchy nurture the myth that we, the people of Britain, are lucky to live in the best country in the world, the quickest, fastest, most generous and civilised.

It is, red wall voters, untrue, the big lie. In comparison to the rest of Europe, the standard of living, quality of life, education, pensions, food, weather and life chances are way, way down at the bottom end of the scale.

The NHS, the pride and joy of British people, has been ripped apart and 40% sold off to private companies and American hedge funds. It will get worse. If you can’t get a GP or hospital appointment, don’t blame the hard-working nurses and doctors. Blame the government that has robbed the hospital trusts of funds and employed incompetent managers whose role has been to break the system, not oil the wheels that keeps it going. Next year it will be worse. And the Daily Mail will tell you it is better.

The Upside of Brexit

If you are a gangster, South American drug lord or Russian oligarch, it is easier to conceal your stolen blood money using lawyers, accountants and investment advisers in ‘the money laundering capital of the world,’ as anti-mafia journalist Roberto Saviano described the City of London.

For those who believe Boris Johnson would be fun to have a pint with, you are right, he would be fun. But when your back is turned, he will be laughing at you, making fun of you, of your accent, your clothes, your wife, your children with their poor school results because they are attending schools Mr Johnson, Liz Truss and their party have been starving of cash for decades. As George Orwell warned: If you want a picture of the future, imagine a boot stamping on a human face – forever.