The bombing of Guernica on 26 April 1937 wiped the small Basque town off the map. The outrage inspired Picasso’s painting Guernica, one of mankind’s greatest pieces of art, and has been replicated through March of 2022 by Vladimir Putin’s persistent air strikes on Mariupol.

The attack on Guernica, an undefended town of 7,000 people, was carried out by Germany’s Condor Legion sent by Hitler in support of the Nationalist uprising against Spain’s elected Republican Government. The aircraft appeared in the late afternoon. It was Monday. Market day. The streets were packed. Wave after wave of Junkers and Heinkels delivered two-pounder incendiary projectiles and 1,000-pound Sprengbombe Cylindrisch, thin-cased demolition bombs that rained down like the fire and brimstone on Sodom and Gomorrah.

The church of Santa Maria received numerous directs hits. As the walls crumbled, the tower shimmied for a moment, then toppled like a felled tree. The bells tolling to warn of the attack tolled one last time to ring out the end of a thousand years of history. People as they ran with their children were gunned down by low flying Messerschmitts. It was the first time an aerial saturation bombing of a civilian population had ever occurred. The fires burned for three days. Up to 1,600 people died.

The justification for the bombing of Guernica had been to impede the retreat of the Basque militia by destroying the bridge over the River Mundaca. Nearly four hours of blitzkrieg had left the bridge standing.

Before the Bombing of Guernica

Spain’s Second Republic came to power in February 1936 following the exile of King Alfonso XIII. Women were able to vote for the first time and tilted the balance in favour of the coalition made up principally of liberals and socialists promising equal rights, land reform and the creation of a universal health service, the first country in the world to do so.

Five months after the election, on 17 July, a Nationalist front of the land-owning rich, the Church and a brutal military led by General Franco rose up to overthrow the government. It was the beginning of a three-year Civil War in which one million people were lost and Spain lived under a dictatorship until Franco’s death in 1975.

The Nationalists were supported with modern weaponry and troops from Fascist Italy and Nazi Germany. Britain, France and the United States maintained a policy of non-intervention. Even after the destruction of Guernica, they sent no aid, no arms and made it difficult for volunteers setting out for Spain to join the International Brigades.

The major democracies rightly assumed that the overwhelming fire power of the Nationalists would win the war. They sacrificed Spain’s democratically-elected government to appease Hitler and guarantee good trade relations with the future victors.

Germany on the killing fields of Spain rehearsed battle plans and strategies. The annihilation of Coventry by the Luftwaffe on the nights of 14 and 15 November 1940 followed the same pattern as the bombing of Guernica in 1937.

In the same way that Britain, France and the United States watched from afar as Spanish democracy was savagely crushed by unelected tyrants, they watch again with their NATO allies as Ukraine turns to rubble and the innocent are butchered in air attacks and long-range missiles directed at hospitals, schools and apartment blocks.

When Vladimir Putin came to power in 2000, his plan was to revive the influence of the defunct Soviet Union. He invaded Georgia in 2008 and annexed Ukrainian Crimea in 2014. That same year, the Russian Army occupied areas of the Donbas ‘to protect ethnic Russians from Ukrainian Nazis.’

During the winter weeks of 2022, Putin lined up his tanks and troops along the Ukrainian border and told the world he had no intention of going to war. Western intelligence services must have known this was a lie as everything Putin has said for two decades has been a lie.

This was the time for Britain, France and the United States to show leadership. They knew Putin was a bluffer. They should have called his bluff and sent NATO troops to Ukraine for ‘friendly’ manoeuvres during the Russian build up. It would have turned Putin’s lie into the truth and there would have been no war.

Instead, they fluttered their fingers as the cannon roared and the war planes turned Mariupol with a population of more than 400,000 into Guernica. Putin threatened nuclear war if NATO intervened and NATO has again taken Putin’s word as truth. We have watched from the comfort of our sitting rooms for a month as the Russian Army commits war crimes and mayhem in the heart of Europe.

Our excuse for doing nothing except sanction the Russian oligarchs and promise arms is predicated on Ukraine being outside the NATO and EU clubs. I would liken that to standing across the road and watching a gang of teenaged boys rape a 12 year old girl and not intervening because she is a different colour or class or from a different school.

Guernica is displayed in a large, low-lit windowless room in the Museo Reina Sofía in Madrid. The monochrome mural (7.77 metres by 3.49 metres) blends the contemporaneous styles of cubism and surrealism. It is described by critics as the most moving and powerful anti-war painting in history. I would agree. The masterpiece holds you spellbound and makes you wonder what madness and barbarity lives in the heart of man. 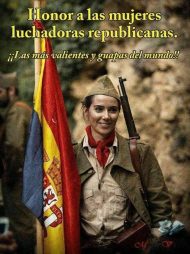 While the militias and volunteers of the Spanish Republic fought for three years against a stronger, better equipped army – much like the Ukrainians today – the social programme promised in the 1936 election campaign progressed across areas held by the Republic. The mantilla had gone. Girls picked up a gun and manned the barricades.

In November 1937, the World’s Fair took place in Paris. Guernica was shown for the first time in the Spanish pavilion. One day, when Picasso was present, a German official spent a long time studying the painting before turning to Picasso.