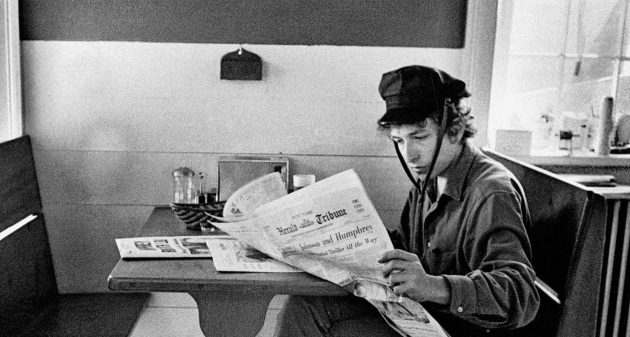 Some critics say Bob Dylan does not have a great vocal range. Others complain that his arrangements are more discordant than one hundred drummers whose hands are a-blazing. They miss the point. Bob Dylan has something to say.

When the mise en scène is a perfect Ming vase of stage sets, props, costumes, lighting and production, you become entranced by the music. That’s what we want from Mozart and Beethoven. Listening to Dylan is bathing in a warm pool of silky words. Just take a bar of soap and wash the garbage out of your head.

Words make us human, unique, the planet’s great communicators. Writers hone, sharpen, twist and mould the language. Through words, we attempt to right wrongs, turn swords into ploughshares. Words are Ariadne’s thread that lead through the labyrinth to the truth. Poets have something to say that we need to hear. Poets are not preachers beguiling us with their view of the universe. They are jugglers spinning out words for us to catch and rearrange for ourselves.

Books Have Something to Say

Words sewn together make an exquisite garment. Put the electronic device down and pick up that magic tablet we call a book. In fiction, you learn to discern the interior life of others and discover who you are yourself. A book is a set of curtains that you open and what’s revealed is the world. A book is a round trip ticket to the seabed beneath the deepest ocean and a rocket trip cross the galaxy. People who read have a certain glow about their faces, an awareness that lies behind the eyes and seeps out in flickers of light. What Lorca called duende.

People who write carry in their soul an inconsolable longing for something and they’re not entirely sure what it is. Writing isn’t something you do because you feel like it. You never feel like it. You write because there’s a rat in your brain chewing up the spirals of your DNA and you want to get the words down before they disappear.

Bruce Springsteen on hearing Like a Rolling Stone for the first time said the track, with its opening snare kick, sounded like ‘somebody kicked open the door to your mind.’

Bob Dylan has insisted through his career that he is ‘only an entertainer.’ Not a teacher or a politician. On reading and listening to  his words, I would say he was always a teacher and in every respect a politician. You just have to listen to Masters of War, Only a Pawn in Their Games, Blowing in the Wind, The Times They Are a-Changin’ .

My best songs were written very quickly. Just about as much time as it takes to write it down is about as long as it takes to write it…In writing songs I’ve learned as much from Cezanne as I have from Woody Guthrie…It’s not me, it’s the songs. I’m just the postman, I deliver the songs…I consider myself a poet first and a musician second. I live like a poet and I’ll die like a poet.

Bob was so far ahead of the curve the curve wasn’t visible. Long before Donald Trump criticised American jobs going overseas, Dylan in 1983 wrote in Union Sundown:

Well, you know, lots of people complainin’ that there is no work I say, “Why you say that for When nothin’ you got is U.S.–made?” They don’t make nothin’ here no more You know, capitalism is above the law It say, “It don’t count ’less it sells” When it costs too much to build it at home You just build it cheaper someplace else