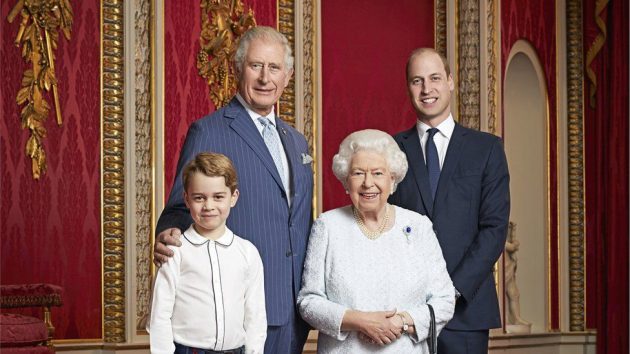 Queen Elizabeth II and Kings for the next one hundred years.

God, the king of kings, is invisible. People want to see their king in the flesh. He has to be present, paraded, painted, a photograph in every school room and public building, as omnipresent as Orwell’s Big Brother.

In the British monarchical system, the king – or queen – is also the head of the Church of England. As above, so below.

The need for kings is championed by the courtiers, the hierarchy who own the land and make the laws. Once you establish the need for kings, the need for dukes, earls, barons and lords is only a small step. They word ‘lord’ is an eponym for all the aristocratic ranks, as in the House of Lords. This reinforces the belief that, like the Lord above, the Lords who rule us are there, like the kings, by divine right.

In Britain today admired celebrities, pop stars, TV personalities, chefs, footballers and dancers may find themselves with titles. This ring of dames and knights is a cushion that adds legitimacy to those with inherited peerages and privileges. When Mick Jagger accepted a knighthood, Keith Richard, the true face of rock-and-roll, had just one word to say beginning with the letter c.

During the Peninsular War (1808 – 1814), Spain’s King Fernando VII fled while French troops raped and ravished his kingdom. Incredibly, he spent his exile in France cosying up to Napoleon and congratulating him when his troops crushed the Spanish. 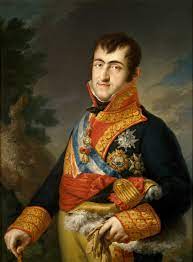 In 1812, four years into the war, 300 men from all across Spain travelled in secret to Cádiz. They were writers, poets, intellectuals, reformists and young army officers sick of war.

Working on draft after draft, arguing and compromising, they drew up what became known as The Constitution of Cádiz. This was a set of democratic principles that put the Spanish people – not the monarch – in charge of their own destiny. What they envisaged was votes for all men, the right to own land and start a business, freedom of the press and a constitutional monarchy with limited financial support and powers.

This was the first written constitution in Europe and set the standard for the form of liberal democracy that spread across the western world – albeit after two world wars the following century.

When the Peninsular War ended, the landowners and bishops returned to their estates and castles. The Liberal 300 who had produced the Constitution of Cádiz demanded that the king comply to its precepts before he returned. Fernando signed every document put in front of him and set off back over the Pyrenees with his exiled court of advisers, clowns, escorts and hangers on.

The newspapers – owned by the selfsame wealthy and titled men who owned the land and made the rules – printed celebratory stories about the king’s valiant return from exile and the crowds cheered as the string of coaches rolled across the nation. They wanted to get a glimpse of their king dressed like Napoleon, the military dictator he admired.

When the party reached Valencia, people crying with joy pushed forward and unhitched the horses pulling the king’s carriage so that they could pull it themselves. Vivan las cadenas, they cried, Long Live Our Chains.

‘Fernando was a vile human being,’ Jason Webster wrote in Violencia, his magnificent history of Spain. ‘…being at once revengeful, petty, treacherous, cowardly, deceitful, self-obsessed … and utterly lacking any aptitude to be king.’

With his villainous landowners, aristocracy and bishops, King Fernando strangled the infant liberal state at birth. Universities were closed – you don’t want uppity peasants learning stuff; censorship returned and, it beggars belief, the Inquisition was reinstated ‘as a symbol of national identity.’ With the backing of the Church, Fernando’s new force of secret police set out across the land to hunt down the 300 men who had written the first liberal constitution in Europe.

Elizabeth II decreed that the wife of King Charles III was to be known as the Queen Consort – even though Mrs Parker-Bowles is divorced and married in a Catholic Church, not the Church of England, of which Charles is now God’s man on earth. Rules, for monarchy, like Lords and Cabinet ministers, are flexible.

The Queen had a personal bank account of some £530 million and an art collection worth a sum far greater than £1 billion – and as much as £10 billion. She owned vast tracts of land across the world and was the owner, not the tenant, of Balmoral Castle and the Sandringham Estate. Prince Andrew received an undisclosed allowance from the Queen from her Duchy of Lancaster estate, millions of pounds of which were spent  fighting sexual abuse charges in the United States. To protect the Firm, as the Royal Family calls itself, Andrew was been stripped of his titles, though not his protection and privileges.

Every year the Queen was provided with living expenses that cost the tax paper £50 million – and never once in seventy years when an extra bill dropped on the doormat did she say – “Don’t worry, I’ll pay for that, use that money from the public purse to feed the country’s hungry children…” now standing after 12 years and two Etonians inmates No 10 Downing Street at three million. THREE MILLION British children go hungry every day in this Constitutional Monarchy ruled by the House of Windsor.

For those who say making sure hungry children are fed is not the role of monarchy, I would say it is the role of every decent human being, especially those with the power and such staggering wealth it would make God’s eyes water.