Dylan and Orwell. Different times. Different genres. But both were lighthouses beaming out shimmering brilliant words to light the way. 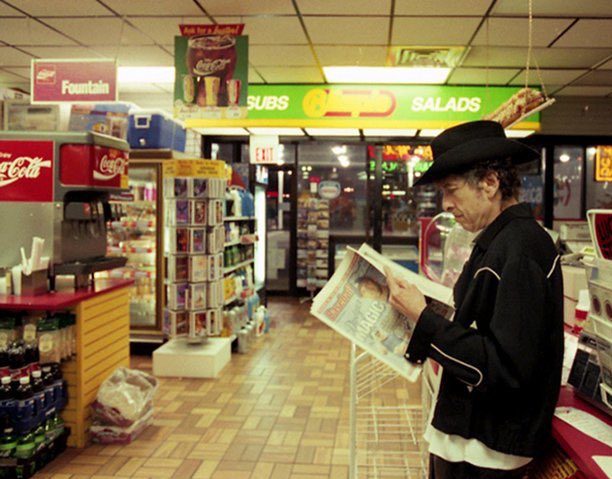 Catching ups with the news.

I was in hospital aged 14 with a cracked skull after a tree fell on my head during a lightning storm in Epping Forest.

My dad gave me a copy of 1984 while I was recovering. ‘Seeing how the tree didn’t kill you, you might be ready for George Orwell.’ He was a man of few words.

By the time I’d left hospital, I had also read Orwell’s Animal Farm and Burmese Days.

In September, a new boy named Martin started at our school. He’d been thrown out of his private school because, he said, he was ‘a rebel.’ Martin introduced me to The Freewheelin’ Bob Dylan and I never listened to the Beatles again.

It was 1963. Dylan and Orwell were a double dose of surrealism, absurdism, politics, existentialism and the dread of popularism. I was 15 now and the boy was vanishing into the man. I read Hermann Hesse, Albert Camus, Jack Kerouac and learned to smoke Gauloises.

We went to a party at the country cottage owned by Martin’s brother, Charlie. University students with long hair rolled joints on the back of LP covers. Girls took off their tops when they danced. I thought the world would never be better than it was at that moment.

Perhaps I was right.

Dylan and Orwell in the Slipstream

I don’t know that Dylan ever wrote anything inspired by Orwell. But if you listen closely to A Hard Rain’s a-Gonna Fall, Masters of War and Don’t Think Twice, It’s All Right from Freewheelin’, the same themes are explored.

Orwell: ‘A people that elect corrupt politicians, imposters, thieves and traitors are not victims, but accomplices.’

Dylan and Orwell would have liked each other. Both had the ability to step outside the rat race to who knows where and look back from the slipstream. They were outsiders, cynical, eagle-eyed. What they saw was the human condition in all its splendour and madness.

David Bowie was a fan of Orwell’s 1984 and had plans to create a musical that never came to fruition. Art projects are like that. In his song 1984 from the album Diamond Dogs, he wrote:

Bowie starts the song subverting Dylan’s lyric from The Times They Are A-Changin’:

Someday they won’t let you, now you must agree
The times they are a-telling, and the changing isn’t free
You’ve read it in the tea leaves and the tracks are on TV
Beware the savage jaw
Of 1984

Orwell: ‘We are living in a world in which nobody is free, in which hardly anybody is secure, in which it is almost impossible to be honest and to remain alive.’

Dylan: ‘You need something to open up a new door, to show you something you’ve seen before but overlooked a hundred times or more.’

What Dylan and Orwell do, Bowie, too, is shine a light. They do not lay out a path for us to follow. We must find our own path. In his song False Prophet from Rough and Rowdy Ways, Dylan writes: ‘I’m the enemy of the the unlived meaningless life.’

It’s a haunting lyric and the best advice you’ll ever get. Live your life. Make it meaningful. Follow your own intuitions. If you’ve read 1984, read it again. It’s better second time around.

Dylan wrote Masters of War in 1962 and must have seen straight into the future and straight through the death mask features of  Vladimir Putin; this is the first verse: