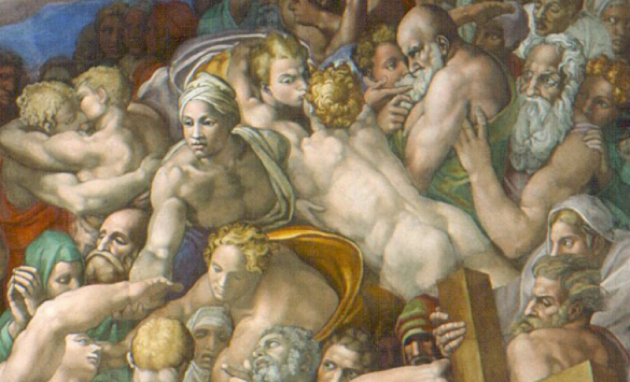 Scene from The Last Judgment by Michelangelo

Saturnalia for the Romans was a time for stuffing themselves until they were sick and drinking until they fell over.

The poet Gaius Valerius Catallus was a big fan of the Saturnalia. ‘They were the best of days,’ he wrote in his memoirs, the old man as old men do remembering the boy he once was.

According to the Greek historian Lucian, each community would choose some simple fellow they named The Lord of Misrule. For a week, he would be dressed in the costume of an emperor, wined, dined and provided ‘every indulgence.’

He would then be led to the Roman Forum to be dismembered as an offering to the forces of darkness. Normally virgins were the first choice for human sacrifice by our pagan forebears, but Saturnalia was a special time that required the blood of a man.

During the seven days of festivities, masters and slaves exchanged clothes and roles. They played dice to decide who would be the household lord and who the servant. No business was conducted, courts were closed and those caught in acts of vandalism were given amnesty.

The poet Lucian of Samosata, playing one year the role of Satan, outlines his concept of Saturnalia: ‘All things serious are barred. Drinking and being drunk is required. Noise and games of chance are essential. Appointing of kings and feasting of slaves, singing naked, and the occasional ducking of faces in icy water, such are the functions over which I preside.’

Saturnalia celebrations began during the week leading up to the winter solstice on 22 December, the shortest day of the year. To mark what was called the Birth of the Unconquerable Sun, candlelit parades heralded the growing light of longer days and culminated with the Lord of Misrule’s journey on the back of a donkey to the Forum on 25 December.

During the feast that followed the sacrifice, masters served their slaves at banquets and gave them inscribed tablets like gift vouchers. The tablets recorded those things they would be able to exchange in the market: sandals, tunics, dolls, candles, caged birds and other trifles they had probably received the year before and donated to charity shops.

In 1808, the great poet William Blake had posed in the hymn Jerusalem the question:

And did those feet in ancient time
Walk upon England’s mountains green?
And was the holy Lamb of God
On England’s pleasant pastures seen?

Believing God to be an Englishman, Victorians assumed those feet did indeed walk the pleasant pastures and mountain tracks of Constable countryside. Nude singing was frowned upon – except by Druids – but carols by candlelight recalled the tradition.

Father Christmas first appeared in the 16th century as a bearded chap in red or green who enjoyed a drink and reflected the times. Henry VIII was king and morals in court were less saintly than Saturnalia.

The fireplace with its sprites of light dancing up the chimney has always been a magical setting and was first made the access for Santa Claus by Washington Irving in his 1812 book A History of New York. A sleigh pulled by eight reindeer landing on the rooftops was added to the mise-en-scène in 1823 by Clement C. Moore in his poem A Visit from St Nicholas (also known as ‘Twas the Night Before Christmas). With the stocking stuffed with an orange and brightly wrapped trinkets, the myth was completed in 1840 by the Christmas tree introduced to the English by Prince Albert, Queen Victoria’s German consort.

The Romans lived under the Julian calendar initiated by Julius Caesar in 46 BC. It was superseded by the Gregorian calendar, introduced by Pope Gregory XIII in 1582, when ten days in October were chopped off to realign the one day error every 128 years made by Romans astrologers. Saturnalian over-indulgence, no doubt.

The calendar was changed, but Christmas remained fixed on 25 December, the day baby Jesus was born in a stable to the Virgin Mary and Wise Men riding camels followed a star from the East with gifts of gold, frankincense and myrrh. They roasted a lamb and there was surely a shepherd with a hip flask to raise a glass or two.

And we shall do the same – in spite of everything. Have a Happy Christmas and, for pagans, a Safe Saturnalia.