A Turkish policeman lifts Alan Kurdi from the beach.

Kurds are fleeing their homeland in ever greater numbers to try and start new lives in Europe.

An unknown number have died along the way.

The most recent was Mariam Nouri Hamadameen, 21. She was the first named of the twenty-seven men, women and children who drowned on 23 November 2021 when their flimsy raft capsized in the icy seas of the English Channel.

She risked her life to be with her fiancé in England.

Fleeing Their Homeland for Greece

Alan Kurdi, a three-year-old Kurdish boy, was among the million refugees fleeing their homeland in war-torn Syria in 2015. On a dark September night, he was jammed into a small inflatable on a beach used by people smugglers in Bodrum, Turkey.

Shortly into the journey to Greece, the dinghy capsized. Alan, his older brother Ghalib and his mother Rihanna all drowned. The photograph of Alan’s small dead body being lifted gently from the sand by a Turkish policeman appeared on front pages across the world.

Alan Kurdi was among the more than 3,600 refugees who died in the eastern Mediterranean that year.

Kurdistan is a hilly, fertile plain locked between the Zafros and Taurus mountain ranges. The same tribe has lived on this land for 7,000 years and never saw the need to declare themselves a nation.

That was a big mistake. As borders became more rigid in the 20th century, the Kurdish population of some 40 million people were promised recognition as a nation-state when the Ottoman Empire collapsed at the end of the First World War.

It was not to be. Britain and France were adamant that they had equal spheres of influence in the Middle East. Two years of secret talks ended in November 1922 with straight lines being drawn by ruler on a map and signatures in blue ink on the Sykes-Picot Agreement.

The accord resulted in the ‘invention’ of a new country they named Iraq ruled over by the British to counterbalance French dominance in the Levant (now Syria and Lebanon). The Kurds were scattered across Syria, Iran, Turkey and the new Iraq with its imported puppet King Faisal I, the son of the Saudi Arabian Emir of Mecca.

Eight years after the controversial Sykes-Picot Agreement, up to 47,000 Kurds living in Turkey were butchered in the Zilan massacre of 1930 during the Ararat rebellion. Kurdish-inhabited areas remained under martial law until 1946. The use of Kurdish names, language, dress and folklore were banned.

Some 5,000 people were killed and 10,000 were injured in the chemical weapons attack known as the Halabja Massacre, or Bloody Friday, on 16 March 1988. Saddam Hussein’s army released mustard gas and nerve agents during the closing days of the Iran–Iraq War in an attempt to drive the Iranian army from the Kurdish city of Halabja. Most of the dead were Kurds.

Fighting for a Homeland

For a century, Kurdish freedom fighters have struggled to create their own homeland. In 1991, following the uprising against Saddam Hussein, the Kurds were granted autonomy within Iraq with Erbil the capital and the Peshmerga an independent military.

Kurdistan modernised rapidly with high levels of foreign investment and the opening of a tourist industry. Erbil became a boom town and people flocked to see the World Heritage Citadel, a fortress city on a steep ‘tell,’ a man-made hill created by generations of people living and rebuilding on the same spot.

Nomads came to the region 5,000 years before Christ, and colonisers from countless tribes have fought their way to the mountain top ever since. The Citadel was first mentioned on clay tablets in 2,300 BC and is the longest continuously inhabited settlement on the planet. Erbil had been a caravanserai, a resting place on the silk road from China to the Mediterranean for a thousand of years.

This is where civilisation began and would have ended if Islamic State had not been overrun by combined coalition forces. The Iraqi Prime Minister Haider al Abadi declared victory over ISIS on 9 December 2017.

The war against ISIS had provided an opportunity for Kurds to show their courage and resilience. Jihadi terrorists had enslaved, raped and killed thousands of women. In response, 24,000 women cast off their veils, picked up a gun and joined the Kurdish Women’s Protection Unit (YPJ). 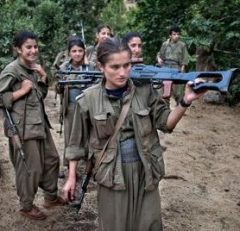 The Peshmerga, combined with the YPJ, were recognised as having done more to combat Islamic State than any player in the conflict. They fought on the front line backed by the United States military and sacrificed thousands of lives in the battle.

This was the Kurds’ big chance to prove themselves as a valuable ally and create a homeland with backing from the United States of America. Again, for political reasons – principally the resistance of US NATO ally Turkey – this never happened.

During the war years and the boom years of the 1990s, Kurdistan had grown more open and egalitarian with new laws introducing women’s rights, an improved education system and a fledgling health service.

All that has disappeared and many of the women fighters have suffered repression from religious zealots asserting their traditional powers.

The Kurds were betrayed by the British and French in 1922 and the United States in 2018.

Since the defeat of Islamic State, the Kurdistan autonomous region has received less funding from the national government in Baghdad. Mafia gangs in Erbil that grew rich through corruption and the black market during the war years ‘own’ the Erbil city officials and life for thousands of people in Kurdistan has grown intolerable.

Their only option is fleeing their homeland in search of a better life. 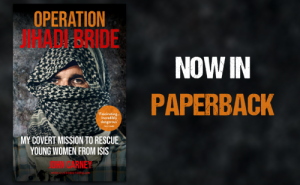 The Kurds war against Islamic State is covered fully in my book Operation Jihadi Bride written with John Carney.

It is available on Amazon on all platforms.