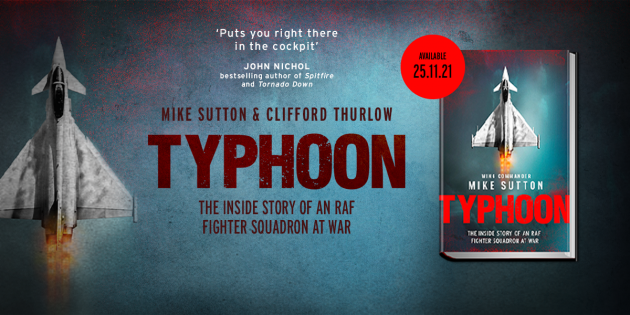 Typhoon – The Inside Story of an RAF Fighter Squadron at War is released today – 25 November 2021. 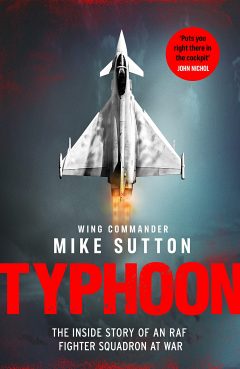 In the spring of 2015, the world looked on in horror as ISIS gunmen in convoys of pickups crossed Iraq and Syria, killing everyone who stood in their way.

They seized an area the size of France, butchered old men whose beards were too short and raped and whipped women who dared to show their faces. After taking control of Mosul, a city of two million people, the jihadis planted their black flags on what they now called the Islamic State.

ISIS terrorists and suicide bombers also slipped into Europe and committed a string of atrocities. The worst was in November 2015 when 130 people were slaughtered and 416 injured in the streets of Paris.

When the West took action, the RAF’s legendary 1 (Fighter) Squadron was dispatched to the Middle East. Through more than 400 sorties and 300 precision strikes in five months of day and night operations, the pilots were in constant danger from ground fire, anti-aircraft artillery and the latest surface-to-air missiles.

The risk of being shot down behind enemy lines was ever present. One pilot who had to bail out – not from 1 Squadron – had been captured by extremists, locked in a cage and burned alive before a baying mob.

The boss of 1 Squadron on what was designated Operation Shader was Wing Commander Mike Sutton. He kept a diary through those months of action and realised when it was over that what he had – aside from a compelling story – was a collection of insights into the hidden world of a fighter squadron.

“When you get back, people ask ‘what was it like?'” What we set out to do was try to answer that questions, to capture the thoughts, feelings and fears of the pilots, as well as the events and drama of the missions. Mike wanted to capture the humanity, as well as providing  some analysis.

For me, it has been a tremendous privilege to collaborate with Mike Sutton in turning his diary notes into Typhoon, not because I had found that once in a lifetime great story to tell, but rather that Mike brings compassion as well as excitement to his memoir. 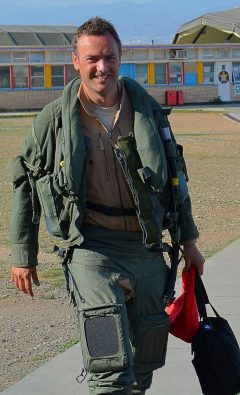 There is no doubt that the battle against ISIS was a just war – every extremist killed saved scores of innocent lives. But Sutton spares a thought for the mothers and fathers of what were radicalised young men whose minds had been twisted and fed by a cruel ideology.

Sutton also came to see that the families left behind suffer deeply, if silently, when their loved ones are away on operations. He dedicates his book ‘To the families of pilots everywhere.’

Mike Sutton is, for me, everything we should want from a Royal Air Force officer. He is a true gentleman, the essence of decency, a man who believes in fair play and honesty. The sort of man when called into action does the job with ruthless efficiency coupled with dignity and humanity.

Typhoon is available in all formats. The book will be on the shelves in bookshops over the next few days, as well as Azda, Tesco’s and Sainsbury’s.