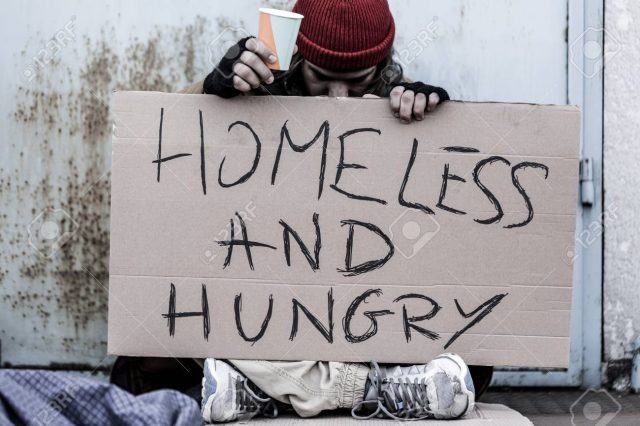 Winter’s coming and there are more people begging on the street than ever. Sometimes I give money. Sometimes I buy a sandwich and exchange a few words. Sometimes I don’t do anything at all. Except feel depressed.

Comedian Frankie Boyle says people always tell him, don’t give money to people begging on the street, they’ll only spend it on drink and drugs. “Well of course they do. What else are they going to spend it on?”

If you were on the streets, hungry, homeless, desperate, you’d drink to escape the hopelessness, the indignity, the shame you’d feel living in the sixth richest country in the world and falling into the gutter. It’s must be even worse at Christmas with the shop windows filled with lights and families out shopping.

When Jesus told the parable of the Good Samaritan, he knew Jews and Samaritans hated each other and reversed what his followers expected to hear in order to make them think beyond the perceived wisdom of the times. The fable tells of a foreign traveller robbed and stripped of his clothes. He is ignored by a Jewish rabbi who passes, then by the Levite. But a Samaritan takes the man home and cares for him.

Bob Dylan writes in his song I Am a Lonesome Hobo:

Dylan reminds me of Jesus: Jewish, intense, provocative. Stand them side by side, and they would have had a far more similar appearance than the Renaissance paintings of Jesus with pale skin and faraway blue eyes.

Is begging on the street as low as one can fall, the ultimate humiliation? Dylan must have given it a lot of thought. I imagine that’s how he saw himself when he set out penniless with a guitar on his back to visit Woody Guthrie, another Lonesome Hobo who had travelled with the dust bowl migrants and played ‘This Land is Your Land’ for pennies and a bowl of soup.

The Buddha was born Siddhartha Gautama, a royal prince. The first time he left the palace, he was struck by four things which would become The Four Noble Truths; the essence of Buddhism. He understood life brings suffering, that suffering is part of living, that suffering can be ended, and that there is a path to Nirvana – the end of suffering. The Buddha cut off his hair and spent forty years begging on the street as he meandered with his message across India.

Begging on the Street Action

Frankie Boyle’s right. Giving to someone begging on the street is a good thing. Direct action. Important to the giver as much as the receiver. Begging has a sort of honesty about it. Beggars bare their souls, their weaknesses: they remind us how lucky we are and how iniquitous a system where even two wage families may still need food banks and free school meals.

This is the second verse of Dylan’s song:

Well, once I was rather prosperous
There was nothing I did lack
I had fourteen-karat gold in my mouth
And silk upon my back
But I did not trust my brother
I carried him to blame
Which led me to my fatal doom
To wander off in shame

This is the story of a man corrupted by wealth and success who has fallen on hard times. There is no one to help him. He did not trust his brother but blamed him for his lack of position and currency. Now he is doomed and alone.

Dylan wrapped up one of his Theme Time Radio Shows with this. “If you are poor, I hope you get rich, and if you are rich, I hope you get happy.” Then he adds, “I’ll leave you with the words of Benjamin Franklin: ‘He that is of the opinion that money will do anything may be suspected of doing everything for money.’”

Listen to I Am a Lonesome Hobo on YouTube