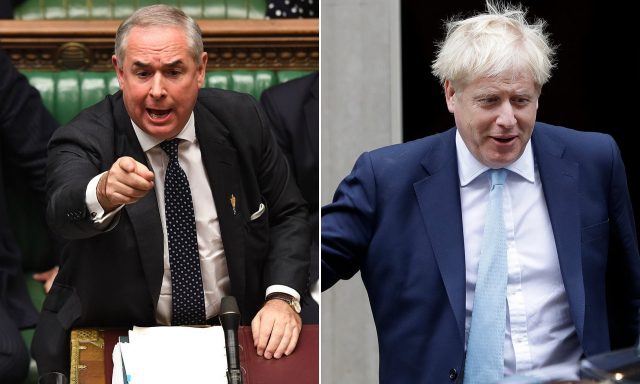 Cox and Johnson Milking the System

Geoffrey Cox is the new kind of Conservative MP: self-assured, self-important and a dab hand at milking the system.

He knows the rules – he knows them better than anyone – and knows how to twist, bend, spin and manipulate them to his own advantage.

Cox collects initials. He’s an MP (the Member of Parliament for Torridge and West Devon since 2005) and a QC (queen’s counsel). They put a Sir in front of his name in the 2021 New Year Honours list for ‘parliamentary and political service.’

Private school and Cambridge, Sir Geoffrey Cox MP QC likes a nice cup of tea and wants you to pay for it.

In January 2016, he had a number of office expense claims rejected by the Commons authorities. One was for a 49p pint of milk. As the Daily Mirror pointed out, it had taken milking the system to a whole new level with his further claims of £2 for tea bags, £1 for bin liners and £94.74 for a new fridge for his constituency office.

While he remembered that 49p for the milk, he forgot to declare more than £400,000 pocketed for legal work. This failure led to his resignation as the chair of Westminster’s cross-party standards committee.

A “leading barrister in England” (his words), at one time in charge of the law of the land as the attorney general as well as the man responsible for parliamentary standards, Geoffrey Cox clearly sees rules as something for other people.

Milking the System in the Sun

Cox earns £74,000 a year as an MP. Not only is being an MP an honour, it is also supposed to be your full time number one major job. Yet, Cox, has managed to find time to earn millions of pounds in recent years working on the side as a barrister.

It may seem like a great irony, even a comedy, that this year, 2021, Cox will trouser around £1 million for work representing various British Virgin Islands government figures, including the prime minister, Andrew Fahie, at a commission of inquiry examining claims of misgovernance and abuse of office. We Brits like to uncover corruption in other countries while Prime Minister Johnson claims there is none in our own.

Cox’s work has allowed him to spend several weeks of winter UK Covid lockdown in a luxury villa on the coast of a tropical island – paid for by Virgin Island taxpayers.

He has also been accused of abusing the rules by using his parliamentary office for Zoom meetings to conduct private business.

And there’s more. According to the Guardian (11/11/2021), Cox rents out a three-bedroom flat overlooking Battersea Park for between £3,000 and £4,000 a month. Despite owning this south London property for more than a decade, records from the Independent Parliamentary Standards Authority, which pays MPs expenses, show that Cox moved in November 2017 into another property and claims £1,900 a month (from you and me) to pay the rent.

With theatrical verve and booming Shakespearean voice, Cox was the warm up act for Boris Johnson when he launched his leadership campaign. He praised Johnson as “a leader who can unify the Conservative family, and out-campaign and outfight Jeremy Corbyn and Nigel Farage, at any time and in any corner of our country.”

Milking the system comes naturally to some people. Tory MPs hone the craft and play the system by rewriting the rules when it suits them. They are slick, good performers, good liars and while they are busy filling their boots, Unicef has launched a domestic emergency response in the UK for the first time in its more than 70-year history to help feed hungry children.

According to the Food Foundation, 2.4 million children (17%) are living in food insecure households.

Hungry children and 49p for Geoffrey Cox’s pint of milk.

The activities of Cox, Johnson, Hancock, Rees-Mogg, Robert Jenrick and all skirt the law. They are not illegal. They are immoral. This rich, educated, clever, greedy, petty, selfish, uncaring group of men play the system for their own benefit and to the detriment of the poor, modest, underpaid, hungry often frightened people of a broken nation.