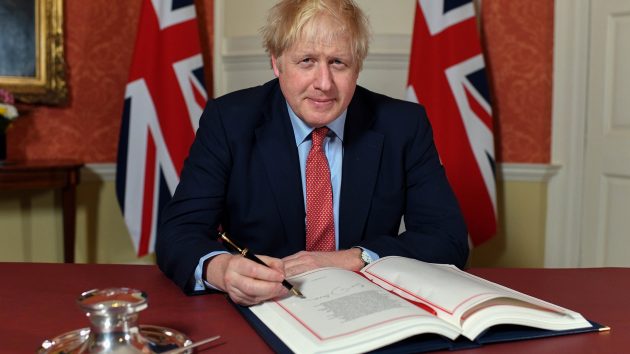 Boris Johnson signing away our future.

Boris Johnson at Eton would have learned all about Plato’s Cave. It was a lesson he took to heart.

In Plato’s Cave, a row of prisoners are chained up facing a wall. Behind them, a fire burns. Between the fire and the wall there is a walkway on which the people who pass carry objects on their heads. The prisoners only see the shadows of these objects. They believe the indistinct mumbles they hear are the shadows talking.

When a prisoner escapes, he learns that what has passed for accepted knowledge inside the cave is totally false. He hesitates before returning to tell the other prisoners what he has discovered? Will they call him a liar? Or, worse, will they come to see that their beliefs were empty and the world they perceived has no substance.

The allegory of Plato’s Cave shows us that the world revealed by our senses is not the real world but a shadow. For many people, the truth remains hidden. This is not through a lack of intellect, but because they come to trust the opinions promoted by those in power and propagated by the media and corporate system that benefits from those opinions.

The escaped prisoner learns that people feel personally attacked when their assumptions are challenged. They are wedded to their own beliefs and would rather retreat back into the cave than accept that their past judgments were wrong.

Plato – born in Athens around 425 BC – draws a distinction between people who believe knowledge comes from what we see and hear, and those who reach the truth through evidence and common sense. The allegory is designed to show that those who trust only in empirical knowledge (their eyes) will end up trapped in a ‘cave’ of misunderstanding.

When Boris Johnson first appeared between twin Union Jacks to announce government plans to deal with Covid, those imprisoned in Plato’s Cave were deceived by the setting, the moving shadows, the mumbles and bon mots. The flags were designed to show a Prime Minister who has ‘taken back control.’

As with all well-honed lies, there is at its core a seed of truth.

The exit of the United Kingdom from the EU means the UK rich have taken back control. They can move their money into secret overseas accounts without European legislation that would have made it more difficult. It means a corporate boss who fails to pay workers the minimum wage or supply acceptable safety conditions is not subject to the European Court of Human Rights. The poor did not take back control. They lost what little control they had.

Britain squandered £37 billion on a Covid test and trace system that failed utterly. None of the money has been recovered. At the same time, while the Prime Minister was boasting that the UK was leading the world with its vaccination programme, more people in Britain died through the pandemic than any comparable European country.

We are told repeatedly that we are ‘leading the world’ and are ‘the best in the world’ by Mr Johnson and his Cabinet members. This sets up an echo-effect that resonates in our minds as an axiomatic truth. When we discover that we have the worst motorway services for truckers in Europe and more children living in poverty than our European neighbours, this truth seems like a lie and it is easier to believe the lie than face the truth. 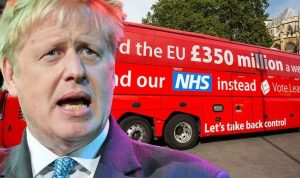 Johnson knows from endless practice that what he says is of less consequence than the way he says it. People trusted the promise that an additional £350 million a week would go into the National Health service once we left the European Union. It did not happen. It was never going to happen. But the prisoners chained up in Plato’s Cave retreated into the shadow theatre of their own misconceptions.

Johnson promised a ‘bonfire’ of red tape knowing that the very opposite would occur. In order to rise through the competition and become Prime Minister, Mr Johnson made two commitments. 1: to resign from the EU, and 2: to leave Europe’s customs union and single market.

Boris Johnson boasted after his trip to India that he had achieved a £1 billion trade deal. A mere drop in the bucket compared to UK exports to France which, according to UN COMTRADE, amounted in 2020 to more than £20 billion. Leaving the world’s biggest, richest and nearest market was a fatal error of judgment.

With his personal Rasputin Dominic Cummings stoking the fire in Plato’s Cave, Johnson knew Brexit would lead to poverty, not levelling up and abundance. He peddled the Brexit deceit because he could and because he would finally outwit his Eton-Oxford-Bullingdon rival David Cameron.

We look to our politicians to provide answers to national problems; that’s why we elect them. But our politicians, bought by lobbyists and in tandem with corporate heads and bankers, have learned from the marketing men that the mere promise of a better, more equitable life is sufficient.

We want to believe we will look younger with the new bio-face cream, run faster than a speeding bullet with the latest trainers, lose those 5 extra pounds with bio-yoghurt. We are so desperate to believe the politician with his promise of more cake and vote for him without studying the facts.

In the last scene in the story of Plato’s Cave, after the prisoners have been told how people live in the ‘real’ world, they threaten to kill the ex-prisoner if he tries to set them free. They fear the knowledge he brings and cling on to the perception of truth provided by the shadows – the TV news, the commercials that echo subliminal messages, celebrity dancing and baking.

What is the answer? Study the allegory of Plato’s Cave. Don’t trust in what you see and hear. Trust in your own analysis, your own deeper intelligence, and remember: beneath the flag the politician wraps himself in are empty promises, vast ambitions and mouth-watering bank accounts.

Learn the Rules of the Eton Wall Game