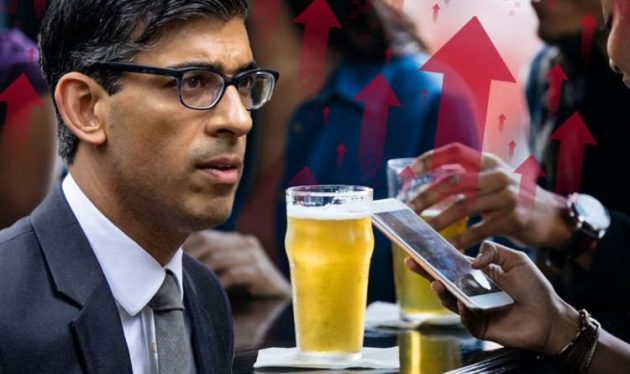 Straight glass drinkers are not amused, according to a poll carried out in my local.

With a pint costing £5 in most pubs, being handed back two copper coins from your fiver is, at best, an inconvenience. Men don’t want wet 1p and 2p coins in their pockets. They want their government to do something about poverty, hungry children, the broken roads, abandoned telephone boxes, filthy service stations, the privately owned water companies pumping sewage into our rivers and seas.

‘No wonder they can’t get any bloody drivers,’ said one of the straight glass drinkers taking part in the poll. He downed his pint and called for another. ‘Keep the bloody change,’ he added.

Like Leavers and Remainers, beer drinkers are divided by the glasses they choose: straight or dimpled with a handle. Those who prefer a dimpled glass often have strong opinions they need to share and clutch the handle of their glass as if it is a gavel to call the bar to order.

Aficionados of the straight glass make a habit of tipping three-quarters of a pint down their gullet the moment it is drawn and immediately ask the barman to top them up ‘with another half.’ They like what they call ‘a quiet pint,’ a bag of crisps and a game of arrows.

The dartboard is a distraction straight glass drinkers employ to avoid the continual flow of views pouring out from some bloke sitting on a bar stool nursing a dimpled glass as he bangs on about trade unions, foreigners, Mrs Thatcher and the Red Ensign that will replace the flag of the European Union on British ships thanks to reforming the tonnage tax regime. ‘And that’s something we could only do now we’re out of the EU,’ said the dimpled glass drinker, quoting Chancellor Rishi Sunak.

Budget come and the budgets go. There are winners and losers. More people will turn out to be losers and rich people will get richer.

As for Rishi Sunak, he won’t be saving 3p on a pint. The glass in the photograph is just a prop. He’s a teetotal.