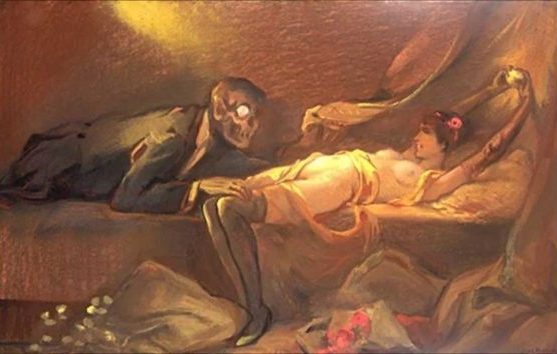 In the story Death and the Maiden, a pretty young woman – innocent, probably a virgin – is seduced by Death, in the shape of a monstrous old man – sometimes with horns, sometimes just a skeleton. The two images capture the yin and yang of all things, all opposites. But, like yin and yang, each contains the seed of its companion and each is artfully entwined in the other.

The first known version of Death and the Maiden appears in The Myth of Hades and Persephone, the daughter of Zeus. Persephone dances as she gathers flowers in a lush garden. She reveals her white breasts as she bends to pick a narcissus. That same moment, the ground opens beneath her and she falls into the burning arms of Hades, who carries her down to the underworld.

Schubert’s Death and the Maiden

The bond between sex and death is deeply-rooted in the human psyche. Austrian psychoanalyst Sigmund Freud argued that the urge to reproduce through sex – thus continuing the species – is the only way to avoid death, placing death in the shadows of all sexual activity. French social theorist Michel Foucault took that thought a stage further in describing orgasm as a petit mort, a ‘mini-death.’ Sexual desire is intensified in the presence of taboos and boundaries, even deadly ones. Old men will take drugs, Viagra or, more exotically, ancient potions like Spanish Fly, in order to achieve that last carnal conquest over the partially willing maiden in all her innocence and fertility. 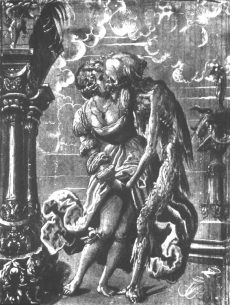 The earliest painting of Death and the Maiden is a 1517 work by Niklaus Manuel Deutsch. It shows death as a rotting corpse, its hand brushing the maiden’s sex. As Death presses against the girl, she does not resist, but yields to its kiss.

When Schubert in 1824 wrote his String Quartet No.14, I am sure he was reminiscing over all the young women he had bedded, or would like to have bedded. Thus, the work became known as Death and the Maiden and has become one of the most popular pieces of music of all time. The Chilean playwright Ariel Dorfman used Schubert’s composition for his production of Death and the Maiden in 1990, the play turned into a movie by Roman Polanski with Sigourney Weaver and Ben Kingsley.

Dorfman’s story is set during a violent dictatorship. Political prisoner Paulina Salas is raped by a sadistic doctor whose face she never sees. Years pass and the regime falls. Paulina now lives in a country house with her husband. When he returns home one night with a stranger named Dr Miranda, Paulina recognises the voice of her warder. She takes him prisoner, reversing their roles, and makes audiences feel uncomfortable as they witness her own sexual desires stirred by this messenger of death.

Gabriel García Márquez in his last novel, Memories of My Melancholy Whores, 2005, relates the tale of a man who decides to pay for a final night of love with a virgin on his ninetieth birthday – a new slant in the new world, but still we can picture the white breasts of Persephone as Hades reaches out from the Underworld. 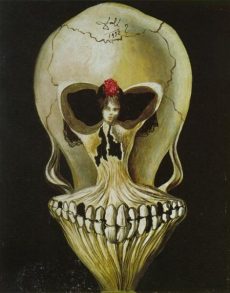 Salvador Dalí reinvented the image as a ballerina embedded in a skull, the iconography reminding us that the sand is racing through the hourglass. Youth is fleeting. Death comes for us all. Eat, drink and make love now, every day, before it is too late.

Not bad advice, but the retelling of the story has always been taken up by men who pay scant regard to beauty as a product of character, or love as a mysterious fusion. Their pens are stiffened by visions of the virgin falling for their own mirror image, a foul-smelling old bloke sliding towards the grave.

New times warrant a new twist on the theme. Death and the Maiden as Death and the Adonis, perhaps, the slim young deity (played by Timothée Chalamet?) falling for the Gorgon Medusa with her fearful features and snakes for hair. Now, who shall we cast in that role?

While you are here, for some reason my book Sex, Surrealism, Dali and Me is free on Amazon Prime UK, US, Spain etc. Also in hardback, paperback and audio. 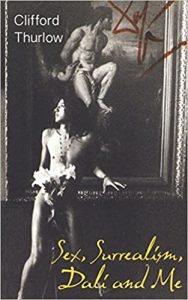