Mata Hari is famous for three things: nude dancing, spying and being shot by firing squad. 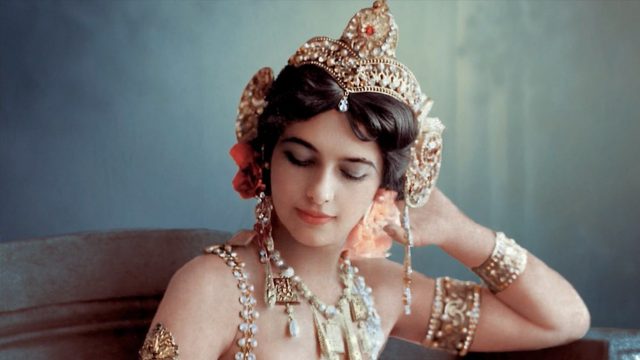 Born in 1876 in Holland, Margaretha Geertruida Zelle came from a wealthy family and was removed from her élite school when the headmaster was caught flirting with her – her fault, naturally.

At 18, she married Rudolf MacLeod, a Colonial Army Captain twenty years older than her. She was whisked off to Indonesia, and was shocked to learn that her new husband kept a concubine. They lived in Java, where Margaretha learned sacred dancing and adopted the name Mata Hari, Indonesian for The Eye of the Day. 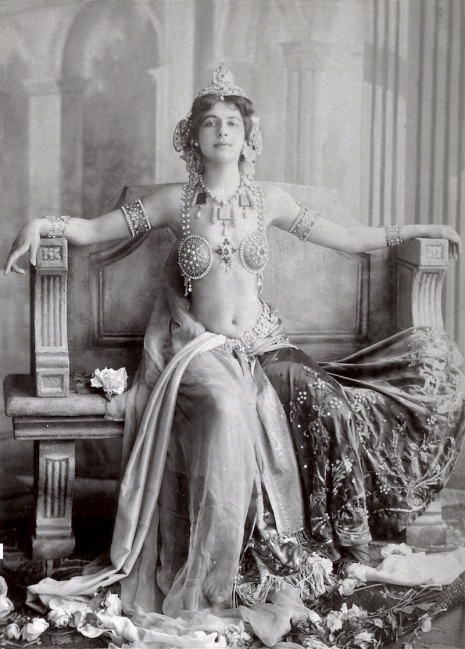 The American Isadora Duncan had just moved to Europe and was attracting big audiences with her scantily-clad dance routines. With her lithe body and willingness to show it, it was just what Mata Hari had been searching for. On 13 March 1905 she made her nude dancing début at the Musée Guimet and was an overnight success.

Like the Dance of the Seven Veils, her act consisted of stripping down to nothing but a jewel-encrusted bra which kept her small breasts under wraps. She did make exceptions and posed naked for those new-fangled one-eyed little black boxes called cameras.

War was brewing, it always is, and this was the big one, the Great War, 1914-18. Mata Hari’s career was waning and she performed her last show in March 1915 while French and German troops faced each other across the muddy battlefields of Neuve Chapelle. Being Dutch, Mata Hari was able to move across borders and travelled to Holland, Spain and Britain. In 1916, the Brits arrested her and she was interrogated at Scotland Yard. Accused of spying for the Germans, she claimed that she was indeed a secret agent – but working for the French.

She returned to France and was arrested again on 13 February 1917 at her suite in the Hotel Elysée Palace on the Champs Elysée. She was put on trial and accused of causing the deaths of 50,000 soldiers by passing  secrets to Germany. When her defence lawyer, Edouard Clunet, was denied permission to cross-examine witnesses, it was clear that Mata Hari’s fate had already been decided. On a chill autumn day in October 1917, Mata Hari was executed by firing squad.

It was assumed after the war that Mata Hari was an innocent shot because she slept with Germans, because France had been ill-prepared for war, because nude dancing was out of fashion and women who take off their clothes in public have to be punished. From Eve in the Garden of Eden and ever onwards, whatever it is, it has always been the fault of women. In Holland they raised a statue to The Eye of the Day and Mata Hari has been celebrated as a prototype feminist ever since.

Fifty years later, the story took its last ironic twist when papers showed up in Germany showing conclusive proof that Mata Hari had indeed been a spy – and a good one at that.

So why did a Dutch woman living in France spy for the Germans? Spies ply their craft for the money, extreme patriotism or the joy of taking risks. Mata Hari was born into a well-off family, married an aristocrat, and became  famous. Had she needed money or security, any number of wealthy men would have walked her down the aisle.

Why did she do it? Because she could. Because she wanted to. Because she was outrageous. Because after all the romantic liaisons and the existential thrill of nude dancing, becoming a secret agent was fun. Mata Hari was 41. She had seen and done it all. Spying was something new and being shot by twelve young soldiers was a poetic end to a life lived in extremis.

According to newspaper reports at the time, Mata Hari dressed for her execution in an ‘Amazonian-tailored suit, white gloves, a low-cut blouse and a tricorn hat.’ Was she smiling? I bet she was. And, a century after her death, in the Age of Celebrity, we are still talking about her.