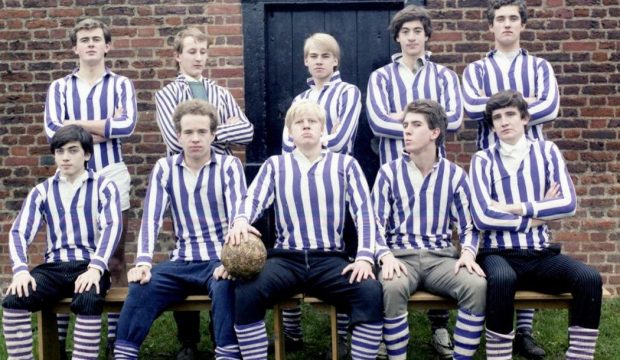 David Cameron dropped the ball and Boris Johnson scrambled it out of the scrum with a series of feints, dodges and subterfuges. There is only one rule in the Eton Wall Game and only Old Etonians know what it is.

The Eton Wall Game is only played at Eton, the poshest school in the world. The purported purpose of the game is to score a ‘shy’ by running a ball up a curved brick wall built in 1717. Once a ‘shy’ has been achieved, players can attempt to convert the ‘shy’ into a goal. The field has two ‘goals’, one an old garden door, the other a tree.

The last goal scored in the Eton Wall Game was on St Andrew’s Day in 1909, an occasion still spoken of with nostalgia as is, for example, England’s surprise victory over the French at Agincourt on 25 October 1415, St Crispin’s Day – and a sign, that God, as we have been taught to believe, is an Englishman who almost certainly went to Eton.

‘The Eton Wall Game is exceptionally exhausting and is far more skilful than might appear to the uninitiated,’ it clarifies at www.etoncollege.com – ‘The skill consists in the remorseless application of pressure and leverage as one advances inch by painful inch through a seemingly impenetrable mass of opponents. Few sports,’ it adds, ‘offer less to the spectator.’

The ‘rules’ of the Wall Game change depending on where the players are positioned on the field, sometimes they can touch the ball with their hands, sometimes not. During the process, they speak an esoteric language laced with words like ‘bully’, ‘furk’ and ‘calx’.

To an outsider, the game appears to be just a lot of posh boys barging each other and rolling about in the mud as they move the ball without touching it with their hands or feet. When someone picks up the ball and kicks it, no one knows why except boys who went to Eton. That’s really the point. The Eton Wall Game is designed to confuse, unsettle and demoralise, while making the uninitiated seem ill-informed, unattractive, badly-dressed with the wrong shoes, déclassé, oiks and outsiders. 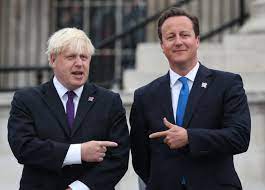 Cameron was not the captain of his Wall Game team. Johnson was a shoe in for the role, a wily, tough, unscrupulous, ball-hugging opportunist admired by his peers. And no doubt the Old Etonian Peers and party donors lining the red benches in the House of Lords.

Cameron and Johnson both had their hearts set on being Prime Minister not because either man had a vision of the Britain they wanted to create. They wanted to be Prime Minister because it was a jolly nice job with lots of perks and post career opportunities, a sort of extension to prep school, Eton and Oxford. Cameron got there first. Johnson got there after a stunning coup de théâtre aided by the sleight of hand and long list of lies from his old friend and new enemy Dominic Cummings.

It is not unusual to become PM if you attend Eton. Three old Etonians in ten years from 1955 to 1964 took the top job: Anthony Eden, Harold Macmillan and Earl Alex Douglas-Home (pronounced Hume, for the uninitiated).

One should add at this point that public school in England means private school – as the Ministry of Defence deals with war and the Ministry of Health looks after the sick. At least, that was its purpose when launched by a Labour Government in 1947, although many observers have noted that since Jeremy Hunt (Charterhouse) and Matt Hancock (The King’s School, Cheshire) took on the ministerial health portfolios it appears the political resolve is to dismantle the NHS into bite size pieces easy to swallow by circling hedge funds and friends of Tory ministers, a strategy introduced by Margaret Thatcher by ‘stealth,’ the very word used in a secret policy document of the time.

Present health secretary Said Javid, a confirmed Thatcherite and financial genius, did not attend private school and, like all converts and turncoats, continues Thatcher’s sacred mission. They sold the Post office and British Rail. If there is anyone in Britain who still believes they won’t sell the NHS, they must be spending too much time studying the rules of the Eton Wall Game.

While 7% of children in the UK attend private schools, those at major public schools number less than 1%. These schools, including Eton, having charitable status, a form of subsidy granted to the richest people in the land.

Britain is ‘deeply elitist’ according to a report by the government’s Social Mobility and Child Poverty Commission. People educated at public school and Oxbridge create a ‘closed shop at the top’ and elitism ‘is so embedded in Britain that it could be called social engineering.’

Of course Old Etonians and Harrovians don’t just become Prime Ministers – they also sit around the Cabinet table at 10 Downing Street (‘…a preposterous number,’ according to Michael Gove, a common or garden oik). Some 70% of top judges went to the best schools; they rule unelected from the House of Lords and ‘serve’ as civil servants, army officers, leading businessmen, diplomats, spies, university chancellors, even cricket and rugby captains – though not football, a game for plebs, and one must admire Prince William (ex-Eton) for marrying and pretending to be one.

With sporadic, brief periods of power from Liberal and Labour Governments in the last century, for most of the last 300 years, Britain has been governed by the same class of men who make the laws and own the land. They are the chosen, the inheritors of wealth and titles who habitually know each other’s families – “If we don’t know them they can’t be worth knowing!”

In league with the Royal Family, they have ruled the British 99% for so long it seems like destiny, like an Act of God. Through bogus promises of greater freedom and an extra £350 million a week for the NHS, the people voted for Brexit without understanding that ‘brexit’ is just another word in the lexicon of the Eton Wall Game played out between Cameron and Johnson who, through ‘the remorseless application of pressure and leverage’ advanced ‘inch by painful inch through a seemingly impenetrable mass’ to score a ‘shy’.

Brexit for the majority isn’t a ‘shy’. It is an own goal in their own incomprehensible wall game where the rules require players to bash their own heads against a wall until their brains turn to mush and their sole guide to the future are the faces of the Conservative Party contenders for PM beaming out from The Daily Mail, The Telegraph and Rupert Murdoch’s Sun and The Times.

There is only one rule in the Eton Wall Game and that is, for Etonians, that life is a game played behind a curved wall with rules they don’t have to follow and, for them, do not exist. If Boris Johnson has a belief, this is his belief. And for all those new Tory voters who would really, really like to have a pint with good ol’ Boris, good ol’ BoJo, he will to your face be charming, witty and amusing. Behind your back he will make fun of your accent, your clothes, your beliefs and your gullibility for voting for him.

Read – How to Take Back Control