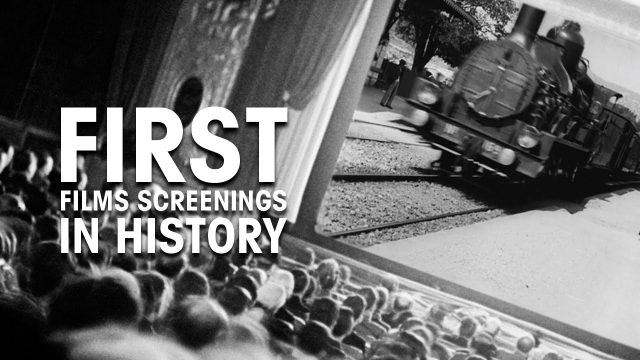 On a cold December night three days after Christmas in 1895, guests filed into the dimly-lit basement at the Grand Café on the Boulevard des Capucines in Paris. In this age of marvels and miracles, what the people had come to witness was what Louis Lumière described as ‘An invention without a future.’ 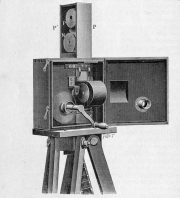 Louis and his brother Auguste set up a wooden box with brass fittings they called Le Cinematographe. After a brief introduction, they turned down the lights and the people sat holding their breath in the darkness. Louis cranked the machine to life and it projected a field of light onto the wall.

At first, all the people in the audience saw was a misty scene in black and white like an out of focus photograph. But then, to their amazement, what appeared on the wall was a set of railway tracks with a low-angle close-up of a train looming in a swirl of steam towards them.

There was no sound but, so realistic was this magic trick, as the big locomotive drew closer, they screamed and threw themselves under the tables. People ran for the exit. One man was heard crying Nous allons tous mourir. We’re all going to die.

The lights were lit again. The people regained their composure, such are the effects of magic, and watched the rest of the show. The Lumière Brothers screened ten short films lasting twenty minutes and, far from being an invention without a future, those people who had assembled at the Grand Café that night in 1895 were witnesses to a moment in history. The cinema had begun. 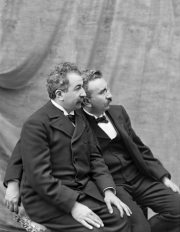 Auguste and Louis Lumière had been on the trail of the moving image for most of their adult lives. They had attended the technical school in Lyon and grown up surrounded by the paraphernalia in their father’s photographic studio.

During the last years of the 19th century, photographers and inventors across the world had been trying to film and reproduce motion, but it was the hand-held, relatively lightweight Le Cinematographe, functioning as a camera, projector and printer all in one, that was the first to screen what can accurately be described as motion pictures to an audience.

The Lumière Brothers had taken their camera out into the street and shot what they called actualities – scenes of everyday life, the steaming train being the best known. Being techies, they didn’t immediately grasp the potential for creating entertainment.

Louis Lumière’s doubts about the practical use of motion pictures quickly transformed from irony to paradox through the years of his pioneering work as a filmmaker. Even before aircraft were seen in the skies, the Lumière Brothers had captured the first aerial shots – from a balloon – and created the first short film catalogue with the 1,500 short films they shot in the coming years.

Far from having no future, the movies had an instant appeal to the public imagination. Fine art and literature habitually serve an educated elite. The theatre requires actors on stage being paid day in day out. But a cinema programme can be shown eight or ten times a day and, with such economies, every factory worker and housemaid at the turn of the 20th century could afford a ticket.

Finally, we had an art form/entertainment/business that had mass appeal and, more, could reach the entire world. James Cameron’s Titanic took $1.8 billion at the box office and has been seen by hundreds of millions of people.

There is, as is often said, something magical about the movies, something that appeals to our primitive nature. As we sit in the darkened auditorium waiting for the show to begin, we are taking part in the same cultural ritual as our ancestors when they squatted around the campfire staring at the flames and listening to the elders tell the tribe’s myths and fables.

Through time and across cultures, man has been recounting legends that endorse and celebrate our humanity, our innate belief in equanimity, our sensitivity to the needs of others, what George Orwell called ‘common human decency.’ You find the parable of the Good Samaritan in Luke 10:25-37, but with variances on the theme, every religion and society tells same story. 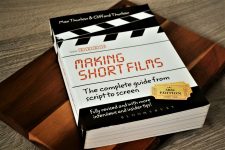 ‘An Invention Without a Future’ is adapted from the film history section in Making Short Films: the Complete Guide from Script to Screen. The book is a standard text at more than 100 film schools in the US and UK.

“This is the only book to describe and explain the whole process – from creating an original or adapted script, through producing and directing to finance and distribution.” – British Film Magazine – Visit Amazon.