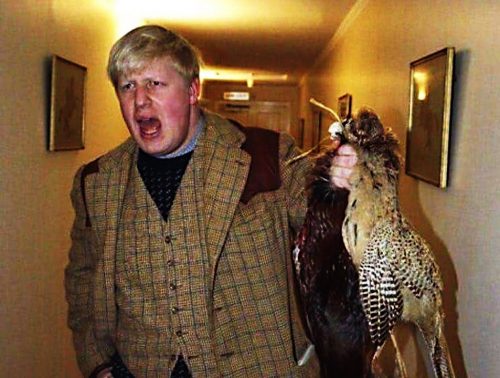 A pair of pigeons live in the elm tree between my house and that of the neighbour. The male pigeon has a stout body, a prominent belly and a short neck shimmering with wine red feathers. He struts around the garden with a sense of entitlement and always seems pleased with himself.

Constantly nodding his head, he pecks swiftly at everything that takes his fancy, seeds, insects, dust dropped from outer space, the greasy smears from crisp bags blown over the hedge. He then looks up with small eyes as if for approval. He wants to be liked.

His female mate is smaller with a spray of white in her wings. She lumbers on short legs in small steps knowing she will be caught. Her companion, sure of his charms, is used to getting his own way. I once saw him snatching a crust from her and she just stood there nodding her head like an ancient toy in the back screen of a motor car. You can never trust a pigeon.

According to a leading ornithologist who preferred not to be named, pigeons are greedy, selfish, self-centred, sociopathic and, if they were human, would say whatever they wanted to get whatever they wanted. For the male pigeon, eating and fornicating is all that matters.

The English pigeon, also known as the feral pigeon, is not actually English. It’s French. Its name derives from the Latin pipio, for ‘peeping’ chick. In fact, when our two tree guests awake at six you can make out the Latin warbles between the hooting and cooing.

‘In the past 35 years, sightings of pigeons in our gardens has increased sevenfold, or a horrible 743 percent, while robins have reduced their cheeky, inquisitive appearances by 45 percent,’ writes Rachel Billington without a hint of ‘false news’ in the Mail Online.

Pigeons do not have bird feet but reptile feet with three toes pointing forward and one long toe pointing back. They pass themselves off as birds, but this is merely to hide their lineage as ‘sky rats,’ to quote our ornithologist, uncouth bullies with no friends outside their own class. When pigeons arrive, the blackbirds, thrushes, bluetits, wrens and robins pack their heads beneath their wings poor things and quietly disappear.

Pigeons’ eyes do not move within their sockets – like humans – making them powerless to look into the future with both eyes at the same time. Our stout male is determined to appear harmless, but this lack of forward vision gives him a shifty appearance he tries to hide behind a charade of comical movements and gestures. 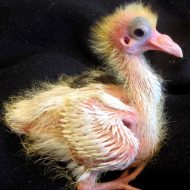 Baby pigeons are called squabs or squeakers. They are so ugly, no one has ever seen one.

It costs the nation millions to clean up the dropping left by pigeons. If the mess isn’t removed quickly, it attracts a fungus that, with regular or constant contact, can lead to a disease in humans that damages the lungs called histoplasmosis. Breathing dust or water droplets containing pigeon poo can result in disorders including high fever, a flu-like illness called psittacosis and the bacterial infection salmonella. People have died getting too close to pigeons.

When the pigeons first came to our tree, my neighbour put out bread crusts. He was an aficionado. The robins had gone. lt was time for a change. He enjoyed our pigeon’s clownish struts, his seizure of the garden from other birds by stealth. He admired the pair’s pretence at being birds before grasping that you can never trust a pigeon.

Finally, with reluctance, we called in the wood cutters and they felled the old elm tree. We have lost the canopy of green shade in summer, the breeze rustling the leaves, the quixotic chance of spotting a robin red breast. The sky rodents have gone but not far. They are busy decorating the branches of a neighbouring tree for a new generation and I fear we will never get rid of them. Never trust a pigeon.