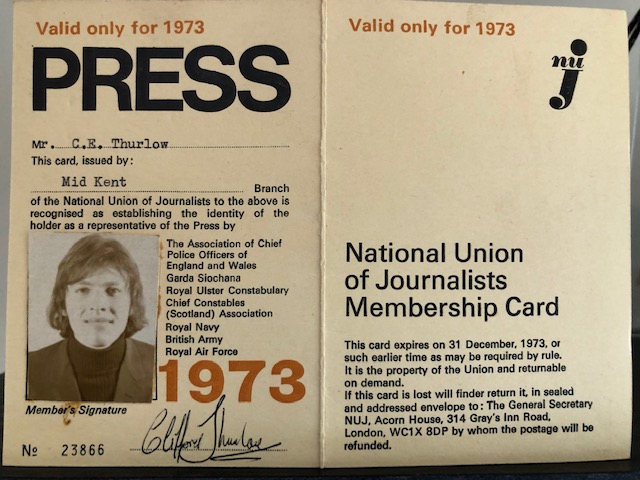 A writing tutor may be a flesh and blood man or woman who pours over your scribblings and offers shrewd advice. You may find your spark in the words of your favourite songwriter – Bob Dylan, say, or an author, William Boyd or John Grisham. If you want to learn how to write elegant sentences with perfect English grammar, then George Orwell is the writing tutor for you.

I learned more about subtlety and subtext from Dylan and Orwell, but my first writing tutor was Mike Marples, the editor at the Isle of Thanet Gazette when I was a junior reporter.

Mike was 6 feet 6 inches tall, took size 14 shoes and had to duck beneath the lintel when he entered the reporter’s room. He was usually holding a sheet of copy when he appeared and everyone would fall silent until his eyes settled on one of his editorial team. He’d then ask: How do you spell conceived; or what’s the oldest bridge on the River Medway; or since when did Lord Thomson put a p in his name? 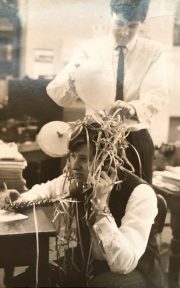 Me on the phone and high jinx at Christmas.

One of us – usually me in the early days – would turn red and the lesson that you had to learn was to check and double-check your copy before it reached his desk.

An editor’s job is not to correct errors or grammar, but to cut the wordy flourishes reporters sweat over but are generally superfluous. The reader wants to know who, when, where, why, what – and then what.

Mike called me into his office and closed the door. Always a bad sign. He explained that the carnival was made up of local organizations and shopkeepers who paid my wages through advertising and bought the paper because they liked reading about themselves and their friends.

I rewrote the article ‘with five miles of mirth snaking its way through the colourfully-lit streets,’ and learned that the local newspaper is part of the community, not a critic looking in from the side-lines. A good writing tutor is a psychologist, as well as a wordsmith.

On General Election night in 1970, Mike invited the reporters to his flat to watch the results. He was a Conservative. So was the rest of the staff. Or, at least they pretended to be. They cheered and refilled their glasses every time a Tory won a seat and I cheered every time Labour won.

After my political rebellion – and the surprise victory of Conservative Edward Heath – Mike Marples began to guide me into different journalistic forms. I wrote about fashion with a ‘Talking about Trends’ column, enjoyed free meals at the best Thanet restaurants with a dining out series, and spent one night locked in Margate’s Theatre Royal, Kent’s oldest theatre – opened in 1787 – to tempt a tryst with the ghost of Sarah Thorne; a task made for a ghostwriter.

When my copy wasn’t good enough, Mike told me to work out what was wrong with it and do it again. When I had written a ‘good’ piece, he would tell me in passing on Friday afternoon that he had ‘put me up ten bob’ that week – an increase of 50p went a long way when beer was 25p a pint.

I discovered Mike Marples’s shoe size when I passed the Sample Shoe Company in Margate’s old Market Square one morning and saw a line of identical shoes in sizes 7, 8, 9 and 10. The size 14 shoe at the end of the line made the display visually compelling. When I told Mike, he rushed off with photographer Bruce Seattle and came back with a new pair of shoes.

When I started work at the Isle of Thanet Gazette, I signed a three-year apprenticeship that allowed me to learn a skill, gain experience and earn a modest salary on the job. I came away with a certificate, the chance to move around within the industry and the confidence to take on new challenges.

The Government has promised to introduce more apprenticeships as part of its ‘levelling-up’ agenda. This would go some way to restoring social mobility, not that I’m holding my breath. We’re still waiting to see that £350 million a week going into the NHS.

I was once offered a bribe – a Bentley, in fact – over coffee on Margate Pier.