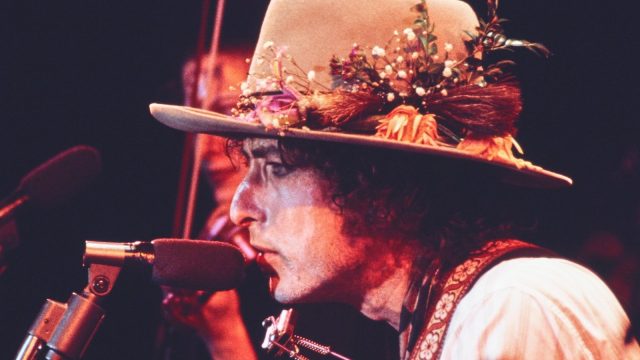 It was 1.30am on 9 February 1963, bitter cold outside in the streets of Baltimore, warm and lively on the dance floor in the Emerson Hotel, where William Devereux Zantzinger was attending a society gathering with Jane, his pretty young wife.

Zantzinger was 24, six foot two, the owner of ‘a tobacco farm of six hundred acres’ in Charles County, Maryland. He was already drunk when he stumbled into the bar and ordered a bourbon on the rocks. He lashed out at a bellboy for no apparent reason, then hit a waitress with the ‘cane that he twirled around his diamond ring finger.’ When she fled in tears, the maid in the kitchen hurried out to the bar to mix Zantzinger’s drink.

The maid was Hattie Carroll. She was 51-years-old, the mother of ten children, a placid, obliging woman ‘who cleaned up the dishes and took out the garbage and had never done nothing to William Zantzinger.’

Zanzinger that night was ‘doomed and determined to destroy all that’s gentle.’ He yelled at Hattie to hurry up as she prepared his drink. He called her a black son of a bitch as ‘his cane sailed through the air and came down through the room,’ striking her twice, on her shoulder and just below the curve of her neck. 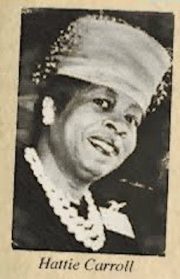 Hattie Carroll returned to the kitchen where she felt dizzy and collapsed. She was taken to Mercy Hospital and died in agony eight hours later as blood bled into her brain.

Zantzinger ‘reacted to his deed with a shrug of his shoulder.’ He was charged with first degree murder ‘and in a matter of minutes was on bail out walking.’ His five high class attorneys got the court venue changed to Hagerstown, a predominantly white area, where three judges reduced the charge to manslaughter.

Bob Dylan in his song The Lonesome Death of Hattie Carroll tells us that ‘the strings in the books ain’t pulled nor persuaded, that even the nobles get properly handled, once that the cops have chased after and caught ’em, that the ladder of law has no top and no bottom.’

This is the legal covenant to which society subscribes, but Dylan uses the depiction ironically. He is, in fact, ‘ashamed to live in a land where justice is just a game,’ as he makes clear in Hurricane. Dylan’s lyric describing the fixed trial and imprisonment of boxer Rubin ‘Hurricane’ Carter became the battle hymn that drove the movement that finally saw the release of ‘an innocent man from a living hell.’

The three judges sitting without a jury on 28 August 1963 found ‘Billy’ Zantzinger guilty of killing Hattie Carroll. He was fined $500 and sent to jail for six months, the term deferred until 15 September so that he could harvest his tobacco crop.

It was a simple twist of fate that the sentence was handed down on the very same day that Martin Luther King Jr delivered his I Have a Dream speech to 200,000 people at the civil rights March on Washington at the National Mall.

Dylan, then 22, sang four songs including Blowin’ in the Wind and recalls in the 2005 Martin Scorsese documentary No Direction Home, that he couldn’t remember ever having seen so many people in the same place at the same time. ‘I was up close when King was giving that speech. To this day, it still affects me in a profound way.’

Travelling back to New York, Dylan read the story of the murder of Hattie Carroll and the subsequent court case in the newspaper. According to the Washington Post, he sat up all night in a café turning news into history writing The Lonesome Death of Hattie Carroll.

Why ‘The Lonesome Death?’ Because no one in the crowded bar went to help poor Hattie Carrol. And why did Dylan remove the t from Zantzinger’s name in his composition? Maybe to emphasise the zz alliteration, maybe because he didn’t think the guy was worth bothering with when it came to spelling his name, and maybe like Zantzinger when he killed Hattie Carrol, Dylan ‘just happened to be feelin’ that way without warnin’.’

While Zantzinger’s trial was still fresh news, Dylan incorporated the song into his live repertoire. He recorded the track on 23 October and  it was released on the 1964 album The Times They Are a-Changin’.

Dylan plays The Lonesome Death of Hattie Carroll on an acoustic guitar with a simple chord structure and a haunting harmonica that drifts in like a faraway funeral bell. His voice is as fresh and clear as a glass of water and in five minutes and forty-five seconds captures as if with a sense of mission all the anger and drama of Martin Luther King Jr’s mass rally in Washington.

In Blowin’ in the Wind, Dylan asks: ‘How many roads must a man walk down before you call him a man?’ – a reference to slavery and racism. In The Lonesome Death of Hattie Carroll, he provides in the recounting of a solitary incident a metaphor for the lingering evils of injustice and segregation that blighted the lives of black Americans in the 1960s and was repeated with the same lack of care for human life in the slaying of George Floyd by police officer Derek Chauvin on the streets of Minneapolis on 25 May 2020, a murder most foul that led to the Black Lives Matter movement spreading across the globe.

After serving his sentence, Zantzinger returned to running the farm in Charles County. He began selling real estate and leased out shanties without running water to black families in Indian Head and Patuxent Woods, raising rents and prosecuting tenants for back rent.

He may have thought he was above the law when it came to killing Hattie Carroll, but the law came for him when he stopped paying his taxes. After pleading guilty to ‘deceptive trade practices’ in 1991, he was sentenced to 19 months in prison and fined $50,000.

Zantzinger discussed The Lonesome Death of Hattie Carroll with writer Howard Sounes for his book Down the Highway, the Life of Bob Dylan, published in 2001. He dismissed the song as a ‘total lie’ and claimed it had had no effect on his life. On Dylan he said: ‘He’s a no-account son of a bitch; he’s just like a scum of a scum bag of the earth. I should have sued him and put him in jail.’

Zanzinger (no t this time) died in Maryland on 3 January 2009, at the age of sixty-nine.

The Lonesome Death of Hattie Carroll is one of the most durable and important songs written in modern times.