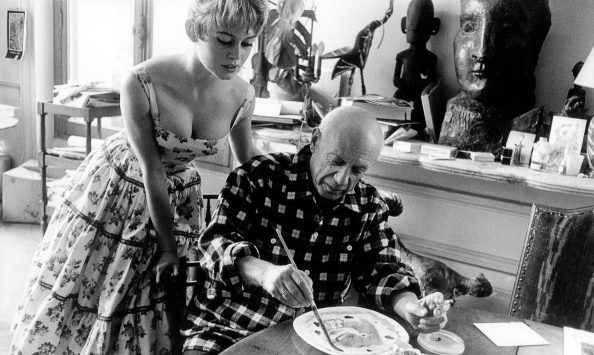 There must be a good reason why neither Salvador Dalí nor Picasso painted Brigitte Bardot.

They both had the chance. They both liked beautiful young women – albeit for different reasons: Dalí because he was a slave to beauty, Picasso because he liked sex with young women.

Yet, neither put graphite to paper, oil on canvas or plunged their hands into a sensuous warm pile of moist clay. Perhaps for the very good reason that the silver screen icon had an inner glow like a nuclear explosion too mysterious to capture or shape. I am sure Michelangelo would have taken a mallet and chisel to a block of marble, but he wasn’t around. 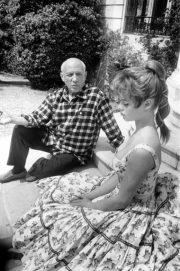 Picasso in 1956 lived in a grand villa on the French Riviera outside Vallauris, where he made fantastical ceramics, paid for his groceries at the local market with signed cheques the tradesmen sold for thousands of dollars and continued to pay his dues to the Communist Party. He was by this time stinking rich but never forgot the dirty backstreets of Malaga where he came from.

When Bardot was at the Cannes Film Festival that year, she made the journey around the coast to visit Pablo’s studio. The meeting was set up by LIFE magazine. They sent snapper Jerome Brierre to capture the sparks when the seventy-four-year roué came face to face with ‘The most beautiful woman in the world.’

Thus spake Grazia Magazine. ‘The secret to her iconic femme fatale style is her signature bouffant blonde hair and cat-eye makeup that she dons whatever the occasion. The overall effect is elegant but sexy; she is the epitome of effortless beauty.’

Bardot at twenty-one was radiant, the star of more than a dozen movies. There were sparks aplenty, but Picasso carried on painting plates and left his sketchpad on the shelf.

Dalí and the Three Act Play 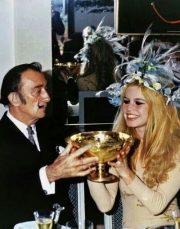 Bardot first met Dalí at Le Castel, the Parisian nightclub, in 1968, according to Amanda Lear, Dalí’s boy-girl muse whose autobiography Le Dalí d’Amanda is a breathless tour de force where the Muse may on a leisurely day have breakfast with Mick Jagger before David Bowie drives her to the airport where she meets Princess Grace in first class and Dalí is waiting for her at the airport in Barcelona with his chauffeur, Arturo Caminada, who learned to drive at the tiller on his fishing boat in the bay of Cadaqués.

Their friendship lasted fifteen years, but Dalí didn’t want Bardot to pose for him. He wanted her to play the lead role in his pornographic three-act play about a beautiful princess in love with both a despot and a priest. It contained long passionate soliloquies on his habitual preoccupations: autoerotism, sodomy and coprophilia. ‘My tongue yearns for the taste of his pure white seed. I crave only to fill myself full with his angry sword. My body is a pit of desire. Warm me and heal me with your golden rain…’ as recorded in Sex, Surrealism, Dalí and Me, my memoir of the Colombian dancer Carlos Lozano. 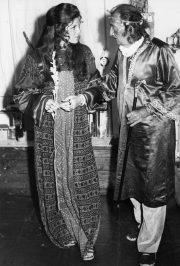 Dalí went through the same rite of passage with Isabelle Adjani, Catherine Deneuve and Samantha Eggar, when the English actress starred in the Light at the Edge of the World with Kirk Douglas and Yul Brynner, the film produced by Alexander Salkind and shot at Cabo de Creus, close to Dalí’s home in Port Lligat.

After plying Samantha with pink champagne, Dalí escorted her to a room with a glass floor. ‘The entrance was shaped like a vagina with bulging plastic lips that seemed,’ as Lozano recalled, ‘to suck you into the warm interior.’ Stretched out on the floor inside was a red tube about ten feet long. It was made of canvas with a skeleton of thin metal hoops not quite as wide as a pair of shoulders. ‘Sex turns on the light,’ Dalí mumbled. ‘When you have an orgasm, the light shines and your soul merges with the universe.’

Dalí asked Samantha to take part in an ‘important experiment’ that required her removing her clothes. ‘You must crawl through the tube very slowly and when you get to the other end go even slower,’ he said. She went along with the game, stripped to her birthday suit and entered the red snake, ‘bending over and wriggling beautifully.’ It was a prolonged process and she emerged bathed in sweat. She went through again and again and each time Dalí grew more excited.

‘You are a baby born from Dalí’s uterus. You are my love child.’ He rubbed his hand up and down his walking cane, then turned to Carlos Lozano. ‘Carlitos,’ he said, and his eyes lit up, ‘take your clothes off. It is your turn.’

While you are here –

Sex, Surrealism, Dalí and Me: The Memoirs of Carlos Lozano  – is available in audio, paperback and hardback. It is currently FREE at Amazon US & Amazon UK in digital form. Just click the link.

“This bittersweet memoir reads like a novel and is filled with beautiful phrases you want to underline: Belief is a self-fulfilling prophecy; Artists often feel sad without knowing why; The secret of success isn’t knowing what you want, it is knowing what you don’t want. So good, I’m going to read it again. Natassha Gray 5***** Amazon review – 5  January 2022

The mystery of Dalí’s toilet seat