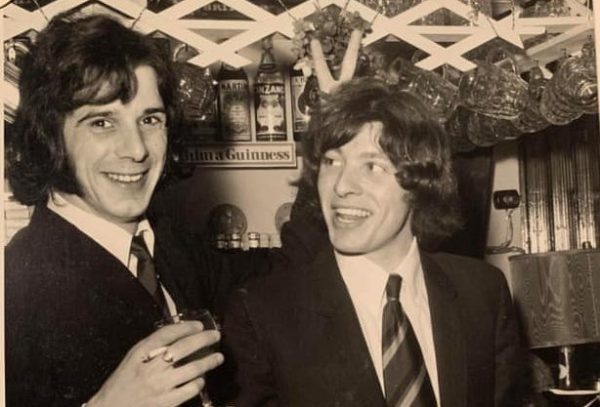 Arthur Guinness signed a long lease on a disused brewery at St James’s Gate in Dublin in 1759 and began brewing the frothy dry stout that would make his fortune.

His formula was to blend malted barley with unmalted roasted barley and add a pinch of ‘aged’ brew to the fresh concoction. The result was a pint of Guinness with a smooth taste but a sharp tang. The black beer’s creamy head comes from adding a shot of nitrogen and carbon dioxide.

Just as country wine only keeps its flavour when it remains local, the best pint of Guinness comes from barrels that have rumbled over the streets from St James’s Gate and are pulled from cold cellars into warm glasses in Dublin pubs.

Back in the winter 1966, when the Irish folk band The Dubliners played Trinity College, Tristram Kent and I jumped in my mini-van and set off over the icy roads to Holyhead to catch the ferry to Dublin.

Guinness at the Stag’s Head

We wore reefer jackets like seamen, bell-bottom jeans and Chelsea boots. Tris carried his guitar in a case. Our interest in folk music had been inspired by Bob Dylan with songs like ‘The Lonesome Death of Hattie Carroll’ and ‘Blowing in the Wind,’ original twists on the folk genre with protest and political threads woven through the musical fabric.

Dylan had been in Dublin in May that year. I am not sure if he had acquired a taste for the black stuff on the tour, but we do know from his autobiography, ‘Chronicles,’ that Bono from U2 makes a point of dropping in at Bob’s farm in upstate New York once a year with a crate of Guinness to spend an evening swapping the blarney and craic.

We booked beds for two nights in a hostel dormitory and set off down O’Connell Street for a pint. We were spoiled for choice with bars on every street corner,  Brannigans, Murray’s, Hideout House, Quinn’s – and another seven hundred pubs to choose from.

We stopped outside the Stag’s Head and got a few sideways looks as customers filed in. One bloke angrily bared his teeth and pointed at Tris’s guitar case. The Union Jack painted on the side was considered useful at the time for getting lifts when hitch-hiking in Europe with the misguided belief – the seeds of Brexit – that Brits were not only superior but popular as well. 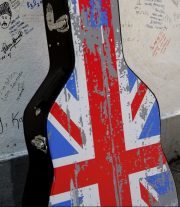 ‘Now what would you be carrying in there? I suppose you are going to shoot a few rebels?’

It was then that the penny dropped. The flag wasn’t something you carried around in the streets of Dublin if you wanted to get through the night in one piece.

She was among the small crowd that had gathered around us. Tris quickly took out his old Epiphone with the scratch board etched with deep welts and ran his fingers over the steel strings.

‘Can you play Kevin Barry?’ someone else asked.

‘I don’t know that one. But I know Dublin in the Green.’

There was a cheer. We were ushered inside and each given a pint of Guinness. Tris tuned the guitar. He was still a novice, but what he lacked in skill, he made up for in energy and volume. The metal fingerpicks he wore made the instrument wail and the whole pub joined in the chorus:

And we’re all off to Dublin in the green, in the green
Where the helmets glisten in the sun
Where the bayonets flash and the rifles crash
To the rattle of a Thompson gun

As if by magic, when we finished one pint, another appeared on the bar. We slept in late at the dorm and dropped in at the Stag’s Head for a quick pint before rushing off to take our seats at Trinity College. The Dubliners roared out their repertoire of rebel songs and we joined in with their more refined version of ‘Dublin in the Green.’

We were off Sunday back to Holyhead for the long drive to the south-east. I had just begun work as a junior reporter on the Isle of Thanet Gazette and was told on Monday morning by Mike Marples, the editor, that I ‘looked like a revolutionary’ and ‘to go and get a haircut.’