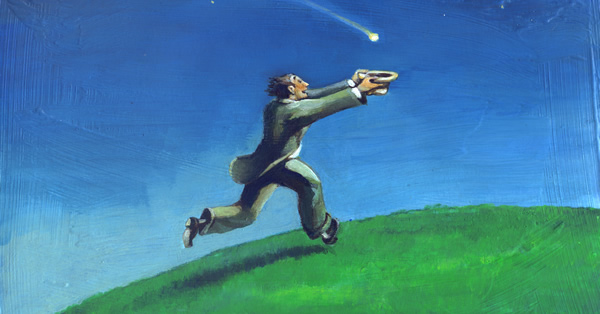 Is being lucky just a matter of, well, luck?

Or is it fate? Destiny? Providence?

Thomas Jefferson is credited as saying ‘The harder I work, the luckier I get,’ but that’s far too simplistic. Men work hard hours in mines and women in paddy fields through long lifetimes without being lucky once. Likewise, in the age of the philosopher Seneca, who coined the phrase ‘Luck is what happens when preparation meets opportunity,’ there must have been a few galley slaves whose only luck was a day without feeling the lash of the whip.

Napoleon Bonaparte’s first desire was to be a writer. He was so unlucky in his literary endeavours, he joined the military and wrote secretly at night, forty long dreadful novels. When criticised for winning battles simply by being lucky, he responded: ‘I’d rather have lucky generals than good ones.’ He also said something that seems particular apt today: ‘In politics, stupidity is not a handicap.’

The Scottish physician Alexander Fleming was working in his lab in 1928, when he noticed mould developing on a sandwich he’d left beside a culture dish being used to grow the staphylococci germ. The mould had created a bacteria-free circle around itself. Fleming experimented further and created the bacteria-killer he called penicillin, the antibiotic that has saved countless millions of lives.

Salvatore Luciano (1897 – 1962) was a Sicilian-born American mobster who controlled the Genovese crime family and is considered the father of modern organized crime in the United States.

Becoming known as Charles Luciano, as a young man he refused to work for another mob boss and earned his nickname from being lucky enough to survive numerous severe beatings as well as a throat slashing in the 1920s. He was arrested twenty-five times between 1916 to 1936 on charges including assault, illegal gambling, blackmail and robbery. He never went to prison.

His last stroke of luck was on 26 January 1962. He flew into Naples International Airport to meet the American producer Martin Gosch, who planned to make a film on his life. What Lucky Luciano didn’t know was that after years of investigation, the authorities had the evidence to bring him down on drug smuggling charges. After a good dinner and a bottle of Sicilian wine, as the police agents moved in, he keeled over with a heart attack and died.

Being lucky is something you have to work on. Lucky people develop a way of seeing, creating and acting on opportunities. They nurture their instincts for making decisions that bring about lucky breaks and know when to persevere and when it’s time to stop. Gamblers say ride your luck and cut your losses.

Feng shui is a Chinese system of orientating buildings, tombs and interiors to harmonize the energy forces and let in good luck. Feng shui in English means ‘wind-water’ and specialists show how by placing windows in ways that catch the wind and through the use of running water in tanks and ponds, the individual feels more at ease in his environment and more likely to be lucky. Of course, you do need to be fortunate enough to own a house where such changes can be made.

Wiseman conducted an experiment where he gave people a newspaper and asked them to count the number of photographs inside. On the second page, there was a message that read: ‘Stop counting. There are 43 photographs.’ Unlucky people missed it. The more observant lucky people spotted it right away.

Try WRITING BY HAND and you’ll find things rising from your subconscious you didn’t know existed.