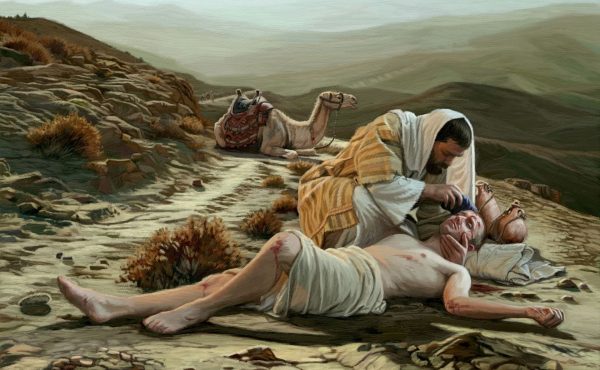 This is the story of the Good Samaritan.

A foreigner travelling from Jerusalem to Jericho was set upon by thieves who beat him and stole his clothes. A Jewish priest and a Levite crossed the road and walked on without helping.

Then a fellow from Samaria came along. He helped the beaten man, took him home and gave him a bed for the night. When he was well enough, the Samaritan gave him clothes and sufficient money to continue his journey.

Jesus told this story in answer to a question by a lawyer (I kid you not) who asked: ‘Who is my neighbour?’ Jesus’s response is found in Luke’s Gospel as the Parable of the Good Samaritan.

Everyone is your neighbour.

The Good Samaritan had come to the aid of a man of a different race at a time when the Holy Land was riven by xenophobia and the hatred of migrants. The lesson teaches us that we must deal with our own prejudices and help others wherever they are from and whoever they may be.

The Good Samaritan’s story has inspired great art and his name has been borrowed by churches, hospitals and charity organisations. The suicide watch, the Samaritans, is staffed by volunteers who provide support to people in the UK and Ireland suffering from emotional distress, struggling to cope, or at risk of suicide.

It had just gone 8.30. The sky was dark and the curtains closed when there was a knock on the door. I didn’t open it. I asked who was there. ‘I’m homeless, can you help me?’ a man replied. ‘I’m sorry,’ I told him. ‘We don’t open the door at night.’

We live neither in biblical times nor on the road from Jerusalem to Jericho. We live in the middle of London. It isn’t merely wise to be careful, it is essential.

While I was taking a walk the following morning, I saw a young guy with a backpack sheltering from the rain beneath scaffolding. He didn’t ask for money, but I felt guilty passing by under my umbrella. It was raining again next day and the same young guy was standing in the same place staring out at the rain. We chatted for a couple of minutes and I gave him £10.

He was about seventeen and seemed pleasant enough, softy spoken, gentle. I could have taken him home; we have a spare bedroom. We could have washed and dried his clothes in the machine and sat down together for some dinner.

Why was I unable to do what the Good Samaritan had done?

There are good, honest, if vaguely shameful reasons why not. The homeless young man may have had psychological problems, a victim of what Mrs Thatcher called care in the community. He could have stabbed us to death in the night. On the other hand, if he was as gentle as he appeared, how could we with our empty bedroom have turfed him out the following morning? We would have to have taken on a long-term commitment, tutors, A-levels, college, adoption?

During the first wave of the Covid epidemic, the government created the ‘Everyone In’ programme to get homeless people off the street and into hotels. It was successful, highly praised, but too expensive. According to a leaked document seen by BBC News, 16 May 2020, ‘the government quietly pulled the plug’ before the second wave.

According to Shelter, there are 280,000 homeless people in Britain. Thousands are sofa surfing and in temporary B&Bs. Families of four or five or six are often obliged to share one room. Minimum wage and zero-hours contract workers live in constant fear of losing their homes. Thousands sleep rough like the boy I  saw that day in the rain. I feel guilty but the problem is not my lack of compassion, the lack of Good Samaritans in our community.

The problem is behind the door at 10 Downing Street where, during the last twelve years under five successive Tory prime ministers, conditions have become so bad, 22% live in poverty – that’s 15 million people. In a class of 40 children, 9 often start the day without any breakfast. Levelling Up is a slogan, not a policy. It will get worse in the next two years under Sunak and Hunt

HUNGER IS A POLITICAL WEAPON