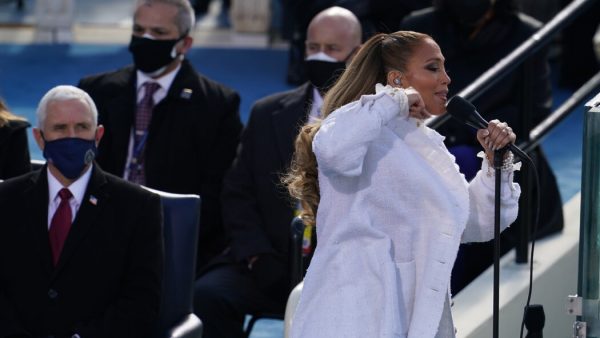 When Jennifer Lopez sang ‘This Land is Your Land’ at the inauguration ceremony for new President Joe Biden, she was channelling Woody Guthrie’s belief in fair play and decency, in democracy, in the truth. His guitar carried the message: This machine kills fascists.

Guthrie wrote ‘This Land is Your Land’ in 1940 in response to Irving Berlin’s ‘God Bless America,’ which ignored, to Woody’s mind, the hunger, poverty and injustice he had seen first hand jumping freight trains and travelling with the dust bowl migrants on their desperate journeys to start new lives in California.

‘This Land is Your Land’ stakes the claim that from California to the New York island, From the redwood forest to the Gulf Stream waters, this land was made for you and me. It does not belong to one class, one colour, one religion, one set of ideals or philosophy.

Guthrie’s original words to the song included a verse he never recorded and was never released after a recording by Moses Asch in 1944.

There was a big high wall there that tried to stop me.
The sign was painted, said ‘Private Property.’
But on the backside, it didn’t say nothing.
This land was made for you and me.

Guthrie’s son, Arlo Guthrie, and fellow singer Pete Seeger came across another verse scribbled on a sheet of  paper now in the Woody Guthrie Archives. Both Arlo and Seeger through their careers made a point of singing the more radical verses to ‘This Land Is Your Land’ whenever they performed the song.

One bright sunny morning in the shadow of the steeple,
by the relief office I saw my people.
As they stood hungry,
I stood there wondering if God blessed America for me.

With its ribbon of highways, golden sands and diamond deserts, ‘This Land is Your Land’ is essentially optimistic, but it is the forgotten verses that capture Guthrie’s deeper thoughts and must have been in the mind of Jennifer Lopez when she sang out to the people of America.

See the full story of The Land is Your Land