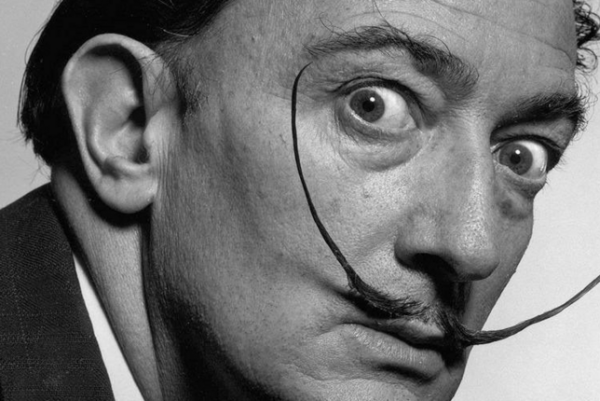 Salvador Dalí was a work of art, his own masterpiece. ‘I work seventeen hours a day,’ he cried. ‘The measure of my genius is the size of the hole I perforate in abstract matter.’

He didn’t believe in inspiration. ‘It is the obsession of repetition the Gods take note of.’ Routine was the watchword and he maintained the same rigid patterns for thirty years.

In the summer he spent his days in the house constructed from four modest cottages in Port Lligat, a pretty bay along the coast from Cadaqués. The maze-like edifice was surrounded by olive groves with surreal sculptures, a penis-shaped swimming pool and his wife Gala’s yellow boat moored to the dock.

At the end of September, he left for the St Regis Hotel in New York where Gala in her thick Russian accent negotiated contracts and the maestro contrived to wake to his favourite breakfast, two slices of toast with anchovies, olives with pips he dropped down his waistcoat and a large cheque.

When spring came, the old black Cadillac driven by Arturo Caminada – a fisherman who had learned to drive at the tiller of his boat – arrived loaded with luggage at the Hôtel Meurice in Paris where Dalí and Gala occupied room 108: the Royal Suite where King Alfonso XIII had lived in exile when Spain in 1931 voted for a republic. 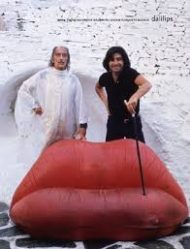 For three months, the high-ceilinged rooms overlooking Les Tuileries played host to the daily Princes’ and Paupers’ Tea – pink champagne, in fact, served to the art dealers who came to rub shoulders with the wealthy and famous: David Bowie with the celebrated boygirl Amanda Lear panting with fake orgasms; the actor/model twins Castor and Pollux: John and Dennis Myers; Léonor Fini, the painter, an ‘insatiable lesbian;’ Coco Chanel in pearls looking more like Gala than Gala; the dancer Carlos Lozano with hair down to his waist; an Italian with plans to market Dalí-flavoured ice cream (with the perfume of his aromatic farts, I imagine); Dalí’s secretary Captain Moore, ‘he always wants moore,’ and Edward James whom Dalí ignored because he was forever in the Englishman’s debt. Sir Edward drove Gala and the Divine out of Cadaqués in his Rolls Royce at the beginning of the Spanish Civil War and supported them at his Italian villa before they sailed to America. Dalí never forgave him.

One year the management at the Meurice made improvements and replaced the old wooden seat in the loo with a shiny new one. Dalí became enraged. ‘You are crucifying me,’ he cried. ‘The essence of putrescence is a soft moving benefaction Dalí turns to gold. They are thieves, filthy French thieves…’

He insisted the correct pew be returned and, when they found an old wooden seat, he knew by the patina of scratches and polish that it was not the right one. They continued the search, bringing more and more toilet seats to the suite until Dalí was satisfied that he had found the one he had shared with the royal buttocks of Alfonso XIII.

He glanced out at the chestnut trees placidly shading the room pale green and his eyes filled with wonder. ‘I am saved. Thank God. I make my finest shits at the Meurice, royal shits I study in blissful euphoria. It is going to be a good year.’

One night in the art nouveau surroundings of Maxim’s, Gala sat next to another Alfonso, the Duque de Cádiz. He was there with his new bride Carmen, the granddaughter of Franco, the Spanish dictator’s passage by osmosis into the bloodline of Spanish monarchy. The Duke was dashing, young and handsome. Gala’s type. She was then about seventy-five and sat there fluttering her eyelashes like Minnie Mouse in her Coco Chanel bow.

‘Are you staying in Paris long?’ she inquired, easing her withered thigh against the Duke’s leg.

‘Another week,’ he replied.

‘Good. You must come and visit me in our suite. We stay at the Meurice. Do you know the hotel?’

‘Yes, very well. I used to visit my grandfather there.’

‘Your grandfather! What was he doing at the Meurice?’

‘Lived there! Why?’ She was outraged.

The Duke was a trifle disconcerted; unusual for a duke. ‘He was in exile,’ he explained.

‘My grandfather was King Alfonso.’

‘He was?’ She paused, blinked and continued unfazed. ‘That’s good. So, you know the suite. You can visit me when Dalí is off with one of his whores.’

Carmen sat at Dalí’s side. He was engaged at the time to paint her portrait. ‘I will mix an extra pinch of vermilion when I colour your cheeks,’ he told her.

Extract from Sex, Surrealism, Dalí and Me:

The Memoirs of Carlos Lozano

LEAVE COMMENTS IN THE BOX BELOW