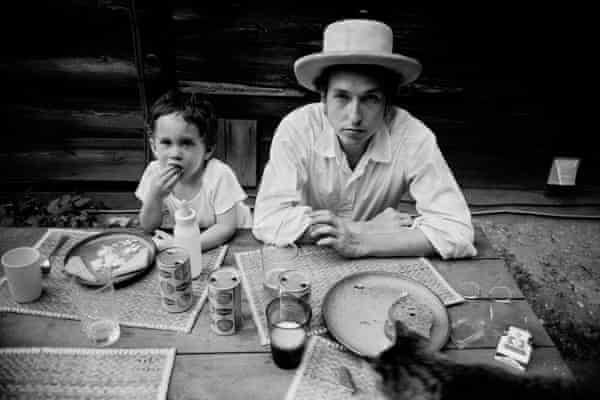 Success is illusive, fragile, hard to pin down, describe or quantify.

Bob Dylan said, ‘A man is a success if he gets up in the morning and gets to bed at night, and in between he does what he wants to do.’

The hard part is knowing exactly what you want to do and whether or not it’s legal, tolerated and not going to be a bother to anyone else. Success is a cloudy vision at the top of a steep hill and you have to make up your mind if you’ve got the energy and inclination to climb it.

In Love Minus Zero/No Limit, Dylan wrote the enigmatic line:  ‘She knows there’s no success like failure and that failure’s no success at all.’ The song is from the studio album Bringing It All Back Home, released in January 1965 when Bob was twenty-three and already knew a lot about success.

By telling us that the woman depicted in the song knows there is no success like failure, he endows failure with a certain cool, a mystique, a paradox. We fail if we have not learned the lesson or ‘done what we wanted to do.’ The act of trying is in itself a form of success.

Then again, success and failure are subjective. When the prisoner in Aleksandr Solzhenitsyn’s novel One Day in the Life of Ivan Denisovich gets two potatoes on his plate instead of one, he has had a very successful day. Playwright Samuel Beckett wrote the dictum:

New start-ups in digital technology have taken this as an inspiration to tighten the spider’s web in which we and the world are caught.

Alexander Fleming failed to make a healthy sandwich in his lab in 1928. From the green mould Pennicilium notatum that grew on his plate, he developed the successful antibiotic penicillin. Mark Zuckerberg failed in his campaign to meet more girls through his social media platform at Harvard and successfully launched Facebook. Christopher Columbus failed to find a new route to the treasures of the Orient and discovered America.

Dylan knew at an early age that he would have to ‘Know my song well before I start singing,’ a line from his 1962 A Hard Rain’s a Gonna Fall, the apocalyptic, post-nuclear nightmare where he visualises ‘a new-born baby with wild wolves all around it and a highway of diamonds with nobody on it.’

Bobby Zimmerman grew up in the bleak, iron-ore town of Hibbing, Minnesota. At fourteen, he discovered the radio stations that came online through the night from Nashville and New Orleans playing jazz, blues, folk and country music. His dad, Abe, had encouraged him to learn piano and violin. With his first guitar, Bobby found he only had to hear a song twice and he could pick out the chords and remember the words.

He formed his first band, the Golden Chords, at Hibbing High School, and earned five bucks at his first playing gig at the Duluth Armory Music Center in 1958. The following year, on 31 January, Bob saw Buddy Holly perform with the Big Bopper and Ritchie Valens. All three died in a plane crash two nights later.

Buddy Holly was ‘a lasting musical role model for Dylan,’ according to Robert Shelton, Dylan’s biographer. Holly had recorded three albums and defined the traditional rock band line-up, two guitars, drums and bass. Most important, he wrote his own songs. Holly’s death at age twenty-two was a reminder that, for anyone who sets out on the road to success, there is no time to waste.

Dylan registered at Minnesota University, but spent his days in the library, not the lecture hall. He read On the Road by Jack Kerouac, the poetry of Rimbaud and Allen Ginsberg, the novels of Jules Verne, H.G. Wells, Tolstoy and, the bible for military strategists, On War by Carl von Clausewitz. 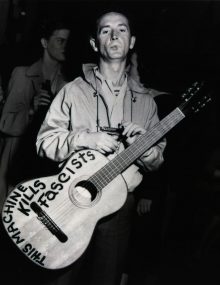 When he came across Bound for Glory, the book changed Bob Dylan’s life. Woody Guthrie’s memoir of riding freight trains and travelling with the dust bowl migrants fleeing to California painted the portrait of a hobo poet making wrongs right with the power of his words and music.

Woody’s guitar carried the legend: ‘This Machine Kills Fascists.’ His concerts supported worker’s rights, fair pay and trade unions. Woody’s most famous ballad was This Land is Your Land, a song of praise to the United States with its promise that:

In response to Guthrie’s anthem, Bob wrote Song to Woody, a lyric that lacks Woody’s bright optimism and lays the foundations of his own vision. He does not see a land made for you and me, the people, he sees a land that:

Seems sick and it’s hungry, it’s tired and it’s torn
It looks like it’s a-dyin’ and it’s hardly been born

With the song in his head and the stage name Bob Dylan – like an old suit, he left Zimmerman behind by court order on his twenty-first birthday – Bob, now nineteen, hitched rides with a guitar on his back to visit Woody at Greystone Park Hospital in New Jersey. Guthrie suffered from Huntingdon’s disease, from which he died in 1967.

Bob in the hospital played Song to Woody – his first serious piece of writing. Woody liked it so much, Bob began a continuous benefit gig, going back day after day to play the entire Guthrie repertoire. Mrs Guthrie put Bob up on the couch and after supper he’d teach Woody’s eleven year old son Arlo a few licks on the old Gibson LG-2 his father had given him.

Guthrie was esteemed by folk singers everywhere. Every day someone would drop into the hospital, the performers Pete Seeger, Dave Van Ronk, Ramblin’ Jack Elliott and Peter, Paul and Mary. They jammed with the kid from Minnesota before the chance audience of movers and managers, Harold Leventhal, Frank Werber, Fred Weintraub and Albert Grossman.

When Dylan moved to New York, he already knew everyone you needed to know to get gigs and earn a few bucks. In the following twelve months, he honed his craft and sang his own songs in the smoke-filled basements and coffee houses of Greenwich Village: Gedes Folk City, the Gaslight Café, the White Horse Tavern, Café Wha?

In March 1962, Columbia Records released the simply titled album Bob Dylan and Albert Grossman was signed on as Bob’s manager. A year later when Martin Luther King Jnr gave his ‘I Have a Dream’ speech in Washington, Bob played for the many thousands present Only a Pawn in Their Game, When the Ship Comes In and Keep Your Eyes the Prize. Peter Paul and Mary played Bob’s anthem Blowin’ in the Wind. They had made it a No 1 Billboard hit. Bob Dylan was twenty-two, the same age as Buddy Holly when he died.

Dylan’s decision to go see Woody Guthrie was a journey along his own highway of diamonds. According to Seneca, the Stoic philosopher who lived at the time of Christ: Success comes when preparation meets opportunity. According to Bob Dylan, success comes if every day you do what you want to do and you know your song song well before you start singing.