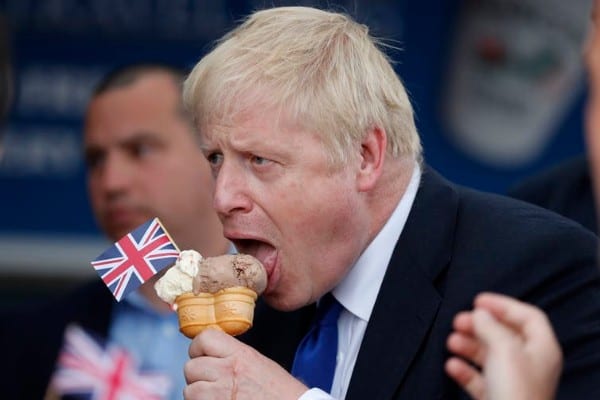 Allowing school children to go hungry is immoral, disgraceful, a political strategy. A weapon of war.

‘More than four million children in Britain are growing up in poverty,’ according to Louise Tickle, The Guardian, February 2020. ‘Levels of food insecurity in Britain are among the highest in Europe.’

Hunger scars you for life.

People too poor to feed their children go without food themselves and feel ashamed when they do eat.

I know how they feel and I know what it is like to go hungry.

In 1974 with my wife Chelça, I made an overland journey through Egypt and Sudan to Ethiopia. Famine had reached Wollo and parts of Tigray in north-eastern Ethiopia. Between 40,000 and 80,000 people starved to death.

At the border, the Ethiopian authorities did not have visa stamps or ink. They searched our backpacks and wrote exactly what we carried on the pages of our passports in pencil. I have no idea why.

We were travelling – recklessly, it has to be said – to Addis Ababa, a three day journey. The only means of transport was trucks carrying bales of cotton stacked about four metres high from the flatbeds.

We had become by chance a party of six: Chelça and me; an ex-British army sergeant and a Harvard undergraduate from the United States, both named Ron; a Canadian girl, Janice, and her Hungarian boyfriend. Gyorgy did not have a passport but carried a document from the United Nations that folded up like a road map with the creases worn thin and the pages stamped with colourful visas. The Ethiopian officials folded and unfolded the document about twenty times and finally scribbled the contents of his luggage on a blank page.

We negotiated a price with a truck driver and set off. The girls rode in the cab. We four men clung on to ropes as the vehicle swerved around winding mountain roads, the cotton bales swaying over the sides of sheer drops.

We caught glimpses of skeletal people like ghosts walking through the heat haze with empty bowls. We saw abandoned villages and heard bursts of far-off gunfire. Civil unrest across the country would by September unseat the tyrant Haile Selassie after forty-four years of dictatorship. 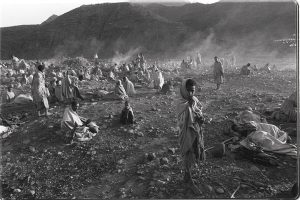 We stopped at night in villages where families huddled around meagre fires and mothers nursed babies with bloated empty tummies. We were able to buy black tea – about $1 a cup (in 1974), but our American dollars, folded in money belts, could not buy food. There wasn’t any.

We spread out groundsheets and slept in a row in sleeping bags beside the truck. I can still recall the empty feeling in my stomach as I stared into the Ethiopian night, hunger mixed with shame that we were present in the midst of a famine, not as nurses or aid workers, but tourists, sightseers, what we pretentiously at the time called ‘travellers.’

Save the Children describes starvation as a war crime. Hunger is demeaning, degrading. It makes people feel dehumanised, unworthy, too weak to stand up and fight for their rights. Hungry people don’t vote.

Food insecurity, hunger and inadequate funds in education struck rural Ethiopia in 1974 and is a growing problem in towns and cities across Britain right now.

More than 1.5 million people in Britain often go ‘a whole day without eating,’ Felicity Lawrence reported in The Guardian, 11 April 2020.

This isn’t Ethiopia in 1974. This is the perilous state of a nation that in 2019 boasted a Rich List showing Britain’s 1,000 wealthiest individuals hold a record sum of £771.3 billion, up £47.8 billion in a year. The Sunday Times reported the number of Britain’s billionaires has risen to 151, an increase of six on the previous year.

This is simple maths: there are more billionaires and more hungry people in the fifth richest country in the world.

Government welfare cuts since the bank crisis in 2008 have pushed many thousands of families into food poverty, according to a report by Human Rights Watch in 2019. Millions of children in Britain go to bed hungry and must wait fourteen hours for a free meal at school the following day.

No free meals during the holidays means for many children no food at all. In spite of this, on Wednesday, 21 October, Conservative MPs voted down a Labour motion to extend free school meals through the holidays until Easter 2021. One Tory MP, Caroline Ansell, quit her Government post in protest.

‘I do not believe in nationalising children, instead we need to get back to the idea of taking responsibility,’ said Brendan Clarke-Smith, Conservative MP for Bassetlaw.

I wonder if he has ever read Dickens?

One night in the workhouse, Oliver Twist finished his thin basin of gruel. Weak with hunger and alarmed by his own temerity, he approached the Master with his basin and spoon in hand.

The Master was a fat, healthy man; but he turned pale. He gazed in astonishment on the small rebel for some seconds, then clung for support to the copper boiler. The assistants were paralysed with wonder; the boys with fear.

‘What?’ said the master at length, in a faint voice.

The master pinioned him by the arm and aimed a blow at Oliver’s head with the ladle.

Charles Dickens’ second novel was published 170 years ago in 1850.

Victorian levels of hunger and misery in Britain have returned and increased every year for the past 12 years. According to the Trussell Trust, there are now 3,000 food banks.

This was not economics. It was a political strategy, an attack on working people by the then Prime Minister Boris Johnson who branded single mothers ‘irresponsible’ and wrote in The Spectator in 1995 that working-class men are likely to be ‘Drunk, criminal, aimless, feckless, hopeless and perhaps claiming to suffer from low self-esteem brought on by unemployment.’

Boris Johnson is not Winston Churchill. Britain is not at war with a foreign enemy. The enemy are those politicians who have promoted austerity, Universal Credit and policies that have led to poverty and hunger. The phrase ‘levelling up’ was never anything more than a meaningless slogan from a petty despot who despises working people and lied, tricked, cheated and blustered his way to Downing Street.

We ate chicken soup and huge ripe mangoes that have grown bigger and riper and more delicious with the passing of the years. Addis Ababa was a confusion of military vehicles racing in close formation through the streets of the capital and the far-away gunfire had moved a little closer. Janice and Gyorgy left us. They were travelling on. Where and why I never thought at the time to ask and wonder now whatever happened to them.

Chelça and I shared one large room in a modest hotel with the two Rons. They had kept us amused for three days with their stream of impractical knowledge. Both men kept lists in their heads: the longest rivers, the highest mountains, the states of the United States in alphabetical order. It passed the time those nights in dirt villages with empty bellies and sleep far-away.

With my junior reporter instincts still intact, I couldn’t resists peeking out from the window at the starry streams of tracer zipping across the sky. The two Rons helped Chelça wrestle me to the floor and we slept with the sound of explosions echoing through the night.

We found a travel agent’s next day. Rival army factions were killing each other and famine blighted the land, but business seemed to be carrying on practically as normal. There was a flight out of Addis to Nairobi, Kenya, the following morning. Few seats remained and only those with special circumstances, including students, were able to buy tickets.

American Ron, Chelça and I carried student cards (Ron was a student; Chelça and I had acquired ours on the black market in Athens before starting the journey). English Ron was over thirty, bearded, grizzled; clearly not a student. He insisted that we get our tickets to get out and we hurried along the shattered street to the Mercato to stock up on mangoes.

In Ethiopia the people speak Amyaric with a script that looks like Arabic. We decided over hot sweet tea that to the unschooled eye, Ronald Fowles and Clifford Thurlow didn’t look that different. We went back to the hotel. Ron shaved. He put on my shirt and we went to another travel agent where he flashed my student card and was able to buy a ticket on the same flight. It was risky, illegal, foolish, but Ron made it home and we have remained friends ever since.

The flight was full. We took our seats among what turned out to be the best-dressed men and the most elegant women I had ever seen in my life. The man across the gangway from me was wearing a pinstripe suit and military tie. He offered me a cigarette and asked in clipped BBC English what we were doing in Ethiopia. I told him I was interested in anthropology and we lit up.

My new friend was, he said, the finance minister of Uganda. The Organisation of African Unity had been meeting in Addis Ababa when the shooting started and the entire plane was filled with Africa’s kings, emperors, presidents, prime ministers, their wives in flowing gowns and children with self-confidence and full tummies.

We had to fill in landing forms for Kenya. I noticed the finance minister had a British passport. I wandered down the aisle and observed that virtually every one of Africa’s political leaders carried either a British or French passport; security, I assumed, in case there was a coup when they were far from home.

We were served a Kenya Airways three-course meal consisting of salad, followed by roast salmon with baby potatoes and carrots, then fruit trifle with coffee, cream and a gingersnap. The finance minister offered me another Rothman’s and I leaned back; the hunger pains gone.

Feel free to leave a comment, question or complaint in the box below. No sign-ups or puzzles.