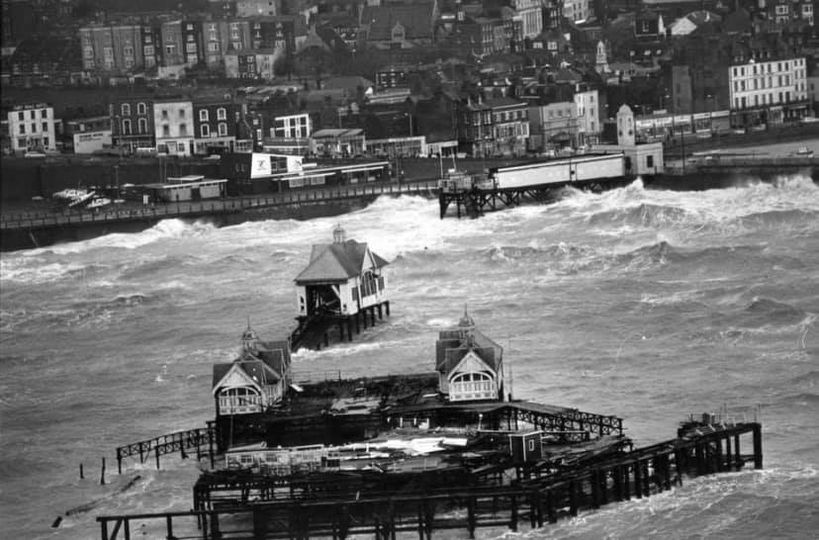 One day I got a call at the office from Ricky Fisher.

‘Alright, Cliff? How’s it going? Listen, I’ve got a scoop for you? You interested?’

I told Reg Foster, the chief reporter, that a ‘contact’ had called with a story and I was going out to meet him. Mr Foster tapped his watch face. ‘Better be good,’ he said, and I rushed down the stairs into Cecil Square.

This was 1967. The Tremeloes had a hit with Silence is Golden. I was a reporter on the Isle of Thanet Gazette and knew Ricky Fisher from covering the local Magistrates Court.

Ricky was parked outside the office in a 1955 Bentley R-Type Continental Coupe, what he called a Baby Bentley; dark red like old wine with red and black leather upholstery and a walnut dashboard so shiny you could see your reflection. It was the sort of car you see in James Bond films.

He drove through Cecil Square, down the hill to the clocktower, right along the seafront and parked at the end of Margate Pier. It’s another story, but a few years later I wrote an article titled ‘No Danger at Margate Pier’ for a newspaper owned by the scriptwriter and then Liberal candidate Tudor Gates. My friend Tristram Kent, who did the layouts, was a slave to aesthetics and to make the headline fit changed the title to ‘Danger at Margate Pier?’ We paid a fine and printed an apology, although Tristram’s heading turned out to be prescient when the storm in January 1978 destroyed the pier once and for all.

Not that June day with the tide coming in and the beach pinned with wavering umbrellas. Ricky Fisher and I sat in the caff at the end of the pier gazing out to sea with frothy coffees in chrome holders. He was wearing a pale blue suit, white shirt and a striped regimental tie; all the petty criminals and hoodlums did back then. So did the junior reporters. Everyone I knew was growing their hair long and every month my editor, Mike Marples, would make a snipping motion with his fingers. I’d make an appointment with the barber not knowing they were fellow Rotarians and the barber had strict instructions that a trim meant a short back and sides.

Ricky Fisher finished his coffee, offered me a cigarette and lit it up with a gold Dunhill lighter. He then took out a bunch of papers from his inside pocket and pushed them across the table.

‘Here we are, mate, present for you.’

I flicked through the registration papers for the Bentley and for a fleeting second pictured myself, left hand on the wooden-topped gear change, right elbow resting against the frame of the open window, the crowds on the seafront watching as I glided by like one of the Beatles with a short back and sides.

He took a long hard sniff and leaned forward confidentially. ‘A mate of mine, Bazza, you know him?’ he said, and I nodded. ‘His mum, she’s a pretty good swimmer, so there’s no danger, like. Anyway, Saturday afternoon, three o’clock on the dot, you have to be here with your photographer. Whassisame? Bruce?’

‘Yeah, good bloke.’ He paused. ‘So, at three o’clock, Edna, Edna Colyer, you should write it down. She’s going to fall off the end of the pier. When she starts screaming, I’m going to dive in and save her. You get the scoop and I sign the papers for the Bentley.’

I let out a cloud of smoke. ‘I can’t do that, Ricky. It would be…’ I tried to think of the appropriate words. ‘False news.’

‘It’s not going to hurt no one, is it? We’re not bombing, whasitcalled? Vietnam?’ This is more important than you realise.’

He took another long hard sniff. ‘What about one of your mates, another reporter?’

I shook my head. ‘It’s not what we do. Stories have to be true. Otherwise…’ I shrugged. ‘People won’t be able to trust anything.’

He stared back across the table, nodding his head slowly up and down, and I was sure he was tempted to lift me out of my chair and throw me in the sea, stage a real time rescue. He came to a decision and smiled. ‘Anyway, it was worth a try,’ he said, and put the car papers back in his pocket.

I walked back to the office and the next time I saw Ricky Fisher was in court. He’d stolen a truck full of televisions, third offence, and went down for two years.

Ricky must have told all his criminal mates his plan, not that it did any harm to my reputation. A year later, Keith Franklin and Louis Holloway bought the Queens Motel in Cliftonville and converted the swimming pool to put on the first dolphin show in Europe.

After the Spanish lion-tamer Ángel Cristo and his partner, Señor Garrido, saw the performance, they made an arrangement to take a travelling dolphin show to Bilbao, San Sebastian and Santander. They would share the gate money, twelve shows a day for ten weeks, netting an estimated £1,500 a day. A fortune. They just needed someone they could trust to open an account and pay the money into the bank.

One afternoon while I was typing up my piece on the carnival – Five miles of mirth snaked its way through the colourfully lit streets of Margate – I got a call from Keith Franklin: ‘Here, Cliff, fancy taking a couple of dolphins across Spain for me…?’

Click and find out why My Dad Wasn’t a Patriot